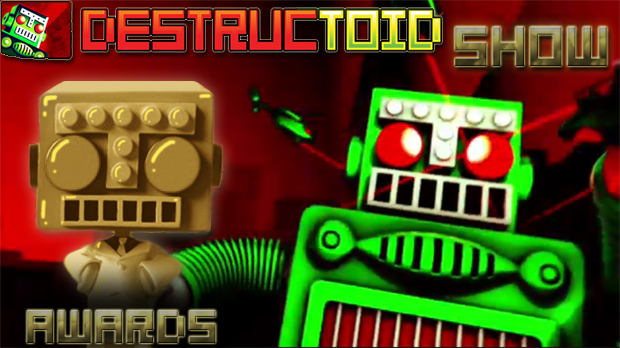 Hey everybody! We’re going to have a two-part awards special on our fledgling Internet television show. We put together the nominees pretty quickly, and have encouraged the Destructoid staff (our voting pool) to use write-ins as often as often as they like. Just because you don’t see a game listed here doesn’t mean it might not win as a write in.

So please, check out our categories and nominees below. I can’t wait to hear what you think of them. There is also a reader’s choice nominee for you to get on.

This exciting as hell! I’m sort of freaking out.

4) Hardest to put down

Duke Nukem Forever is real now
Treyarch to make the next Call of Duty
Inafune leaves Capcom
Nintendo announces 3DS/3DS has a gigantic line-up of games
Marvel Vs. Capcom 3 is finally happening

OK, so here’s how this is going to work. To vote tweet ” My @dtoid game of the year vote is: #dtoid-(blank) ” but without the quotation marks, and with the name of your game in place of (blank). Spell your name in all lowercase, with no spaces or punctuation (Example: #dtoid-haloreach).

If you can’t remember what games came out this year, check out GotY post for a nice list. You have until this Sunday to vote, you can only vote once, so get cracking!