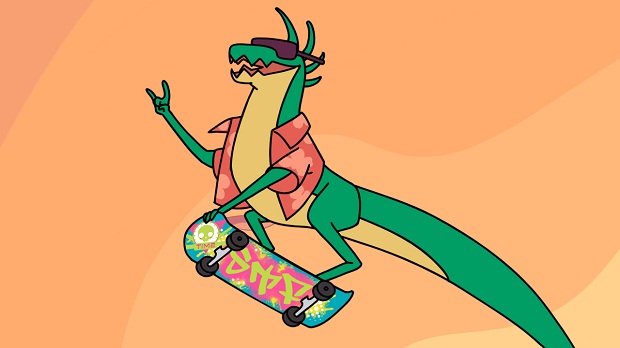 I am a little in love with Super Time Force here at PAX. The game is a retro-looking shooter in the same vein as Contra, with a great twist involving time travel. You can read all about how much we all love the stellar indie game right here.

But there is a character in the game named Zackasaurus (his friends call him “Zack”) who takes everything to a new level. He is a dinosaur that wears sunglasses and a Hawaiian shirt and rides a skateboard. He is even a playable character in the game once you rescue him from one of the giant, screen-filling bosses.

Zackasaurus is modeled after those “too cool for school” videogame characters from the early 90s like Kid Chameleon and Bubsy. He is absolutely ridiculous and his dialogue is hilarious. Also, his catchphrase is “Kookabunga!”, which I can only assume he says while either crossing his arms and leaning on a graffiti-covered brick wall or doing a sick jump on his skateboard. Kookabunga. So amazing.

Zackasaurus is my new obsession and the best new videogame character at PAX. And, oh yeah, Super Time Force is also pretty great. Look for it (and him!) in 2013. You are not ready for how awesome they both are.