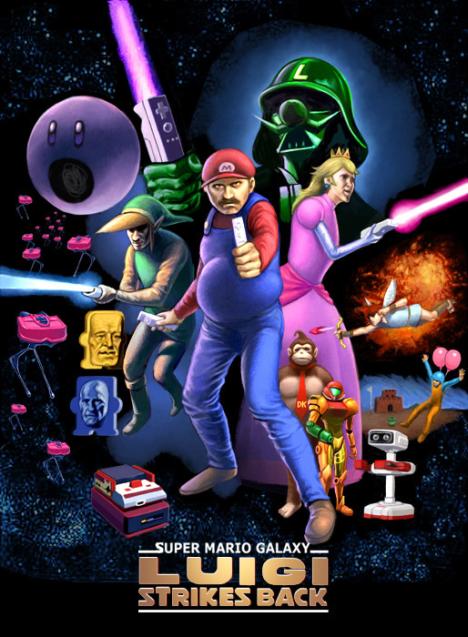 With Super Mario Galaxy destined to hit the Nintendo Wii at some point in the near future, the people over at Asame 5 have created this great Star Wars/Mario mashup in celebration of the Mario Galaxy future release.

Though each character isn’t exactly screaming out who their supposed to represent from the Star Wars galaxy, I was able to figure this much out: Kirby is the Death Star, the Virtual Boys are Tie Fighters, the Super Famicom is the Millennium Falcon, Mario is Luke Skywalker, Princess Toadstood is Princess Leia, Luigi is Darth Vader, Donkey Kong is Chewbacca, Samus is C3PO, Rob is R2D2, and then I’m totally clueless on the rest.

Link could be Han Solo, but he has a light saber, so maybe he’s suppose to be Obi Wan and Kid Icarus could be Boba Fett, but then who’s the guy with the balloons and what’s with the puzzle pieces with the heads? Damn weird Japanese art.

Figure out the rest yourselfs, I’m going to play more FFXII. If you liked this artwork, check out the best or worst of Asame.