Action games can be a bit complicated, and by the time a lot of people pick up the game and play online, everyone else has mastered it (Metal Gear Online immediately comes to mind).

Despite the fact that Anarchy Reigns doesn’t have the hardest Achievements and Trophies in the world, I figured some tips could help a few people brawl their way to the top of the leaderboards, and get further enjoyment out of the game. 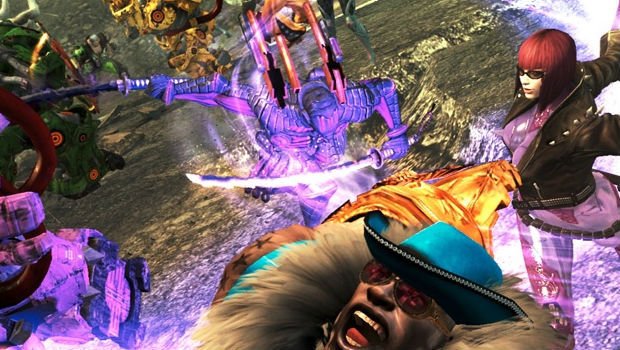 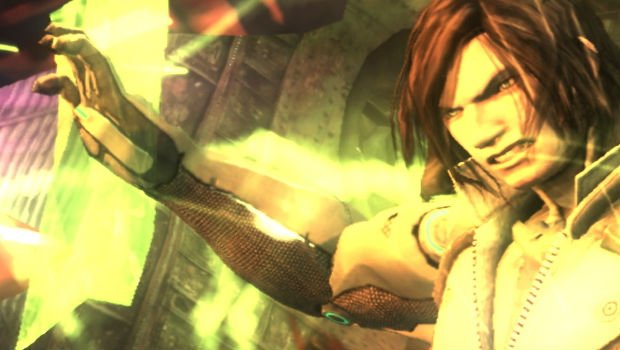 Redundant Achievements (such as “complete Black Side stage 1”) will be ignored, as they are self explanatory (you need to beat stage 1 as Jack for that, one by the way).

It’s only possible to get all of the Achievements by playing through the game fully, twice at a minimum (once on Hard and once on Normal), and using the game’s stage select mode afterwards to clean up everything you didn’t complete. Once you beat both the Black and White sides, you will have the option to use stage select on every level for that difficulty.

Thankfully, there are no multiplayer or rank Achievements — I’m a huge fan of this, as people who pick the game up years from now will be able to achieve the full 1000g/Platinum even if the multiplayer servers are dead.

The tutorial option can be accessed from the main menu and in the first level of the Dark Side story.

Starting on Black Side, complete the Campaign on normal difficulty.

An easy way to get this achievement/trophy is to play the game first on Hard Mode through Black Side, and again on Normal Mode White Side. Then you can just use the stage select option to finish the rest.

As a note, this Achievement also has a hard version. Just repeat the same process — you can use stage select.

Starting on White Side, complete the Campaign on normal difficulty.

An easy way to get this Achievement/Trophy is to play the game first on Hard Mode through Black Side, and again on Normal Mode White Side. Then you can just use the stage select option to finish the rest.

As a note, this Achievement also has a hard version. Just repeat the same process — you can use stage select.

The Best Defense is Anarchy

Earn this right away in the first stage. Just hold R2/RT and wait — the initial batch of enemies won’t do enough damage even if they burst your guard to give you trouble.

In Anarchy, Timing is Everything

The easiest way to get this is to just wait for a slow-moving Mutant, and dodge their giant hammers or choreographed claws. You should earn this one naturally through the campaign mode against bosses.

Path of the Weak isn’t Anarchy

Just mash circle on easy enemies. You can earn this one in the very first campaign stage if you make a point to go for it.

Anarchy is a Killer Weapon!

Killer Weapon attacks are used by holding L2/Left Trigger, and pressing Square/X or Triangle/Y. The easiest way to earn this one is to do the first mission on the first stage, and use the Square/X killer attack to face-melt three to four enemies per attack.

This is a really easy one. Just pop Rampage Mode after earning it (click the left and right analog sticks), and go to town on enemies. The first mission of the first stage for each story is ripe for grinding this one (against regular ol’ enemies), since most people will save all of their Rampage Mode bursts for hard boss fights, and thus, only kill a few people over the course of the game with it.

Duel of the Anarchies

The counter mechanic comes into play when you use the same attack as an enemy. One of the best ways to earn this is to use Rampage Mode in a boss fight against another character NPC, when they use their Rampage Mode — you’ll run into each other fairly quickly and pop the Achievement/Trophy.

Massage with an Anarchy Ending

I didn’t understand how to get this at first, but by “evade,” the game means you need to press Circle/B when an enemy grabs you.

This one may take you a while to get, but playing other boss NPCs is the easiest way to earn it — they throw the most. Just use stage select or replay boss fights. Nikolai and Max in particular tend to throw fairly often.

Defeat an enemy with a combo of 100 hits or longer. (Campaign Mode)

Combos don’t necessarily have to be built into the same chain — they can be initiated within a certain time-frame, against different enemies. The easiest way to gain a combo count is to use Rampage Mode, and press the light attack button repeatedly (Square, X).

Whenever you beat down a mutant, try and take notice of the giant “Press Circle/B” prompt on their character model as they near the end of their health. If you’re vigilant about watching, you should be able to do this without grinding over the course of both campaigns.

The main problem arises when two other NPCs are fighting mutants with you (which happens on occasion), and they steal your kill.

If you’re having trouble with this, try using Rampage Mode to get the Mutants down faster, and rip them apart then — or grind the few missions that don’t have NPC helpers.

The Plural of Ninja is Anarchy

This one took me a while to figure out. In essence, you need the stealth item. All you have to do is use the item, and grab ten people from behind (Circle, B).

As is the case with all item based Achievements/Trophies, save the item until you face a large group of enemies. Stage 1 Free Mission 1 is a good bet on both sides.

Destroy a Helicopter Drone by throwing its missile back at it. (Campaign Mode)

You can achieve this task in any stage with helicopters, but the easiest way to do it is Black Side Stage 1, Main Mission 2. Just press Circle/B right when a missile is about to hit you.

I actually didn’t get this one for a long while, because I never throw anything. Just start Stage 2 and go for the forklifts to unlock this Achievement/Trophy fairly easily, as those explode. Barrels work great too — just wait for groups of enemies to patch up and throw away (Circle/B).

Frozen in Time for Anarchy

I didn’t unlock this for quite some time. The easiest way to get it is to grab a cryo tank (blue), throw it at an enemy, and use a Killer attack to shatter them in one hit.

Defeat 5 enemies by throwing a self-destructing Drone before they explode. (Campaign Mode)

The easiest way to find drones is in Black Side Stage 3, Free Mission 1. Just throw them into enemies and you’ll unlock this one fast.

Someone Set Up Us The Anarchy!

Defeat 10 enemies by throwing an explosive Pyro Killseeker before they explode. (Campaign Mode)

Black Side Stage 1 Free Mission 1 has Pyros right off the bat. Beat on them a little bit and wait for their siren to go off — then grab them and throw ’em at an enemy.

White Side Stage 2 Free Mission 1 incorporates this into the level itself, so you can grind it there.

Hijack a platform with Circle/B in Stage 2, while running around the stage, outside of a mission. Just use the Square/X button to fry enemies.

It seems as if enemies killed during the Black Side Stage 2 Free Mission 1 race level do not count.

Stage 2 Main Mission 1 is the way to go here. Just man the machine gun and shoot down the Transformers (er, Gargoyles).

Black Side Stage 1 Free Mission 3 requires a rifle — if you complete the stage twice, you should earn it very easily.

Lake of Fire? Lake of Anarchy!

Defeat 5 enemies at once with an incendiary grenade. (Campaign Mode)

What a blasphemous Achievement/Trophy! All you have to do here is find a grenade item, and hold onto it. When you find yourself surrounded by five or more normal enemies, just throw it at the ground. Grenades do a ton of damage, so they will make short work of normal enemies.

Repeat Stage 1 Free Mission 1 in Black or White to get this one easily, after grabbing a grenade.

Shock 3 enemies at once with a Supercharged Trap. (Campaign Mode)\

Anarchy in the Calamari

Continually throw the slabs laying on the ground at the Kraken at the start of the fight in rapid succession, then climb to the top of the stage as it crumbles.

Save your Rampage Mode for phase two of the fight, when you’re on the raft, after the Kraken tries to chomp on you — smash it to bits with your killer attack while in Rampage Mode to do quick easy damage.

If you fail, return on Easy Mode with stage select.

Save your Rampage Mode for the start of the fight and just unload. He should go down in a few minutes, tops, if you completely unleash your killer weapon attacks in front of him, and stay behind him when you run out to avoid getting killed.

If you fail, return on Easy Mode with stage select.

Defeat all the bosses with your Killer Weapon. (Campaign Mode)

You need to keep track of this one with a pen and paper to be safe. If you defeat a boss with a Killer Attack, a bonus will pop up on the screen letting you know you did it (Overkill!).

Mark that boss off on your notepad, and use stage select on Main Missions if you need to go back and finish the job. You can do this in tandem with Burnt Out Anarchy.

Defeat all the bosses while in a Rampage. (Campaign Mode)

You need to keep track of this one with a pen and paper to be safe. If you defeat a boss with Rampage Mode, a bonus will pop up on the screen letting you know you did it (Rampage!).

Mark that boss off on your notepad, and use stage select on Main Missions if you need to go back and finish the job. You can do this in tandem with Anarchy’s Executioner.

Unlock all player characters in the game.

This is a weird Achievement/Trophy because there is technically a “secret” character, named Gargoyle. You need to get multiplayer rank 22, or complete the Extra Missions in single-player, after you’ve beaten the Black and White Sides to unlock Gargoyle.

Everyone else can be earned through ranking up in multiplayer as normal, or beating the game as normal.

Complete the game without using retries on any difficulty.

You can’t die even a single time, which is hard for sure, but you can also do an easy run to get this Achievement/Trophy.

Save your Rampage Mode, as it makes you invincible, for pinch situations. If you’re about to die, you can quickly press start and select “retire from mission” to try it again.