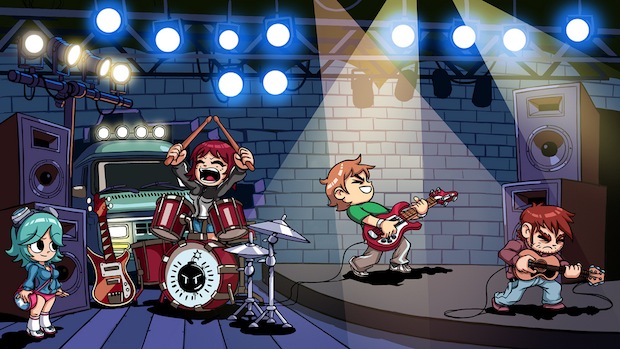 Scott Pilgrim vs. The World: The Video Game is going to look great because they brought in Paul Robertson. We already knew that. But it’s going to sound great because they brought in chiptuners Anamanaguchi for the soundtrack. I’m super excited about that, naturally. Stacking a great soundtrack from a great band on top of great art from a cool property is going to make for a killer game.

The PlayStation Blog has a really cool feature that shows off a few too-short snippets from the game’s soundtrack. They’re placed along with some notes from the band members themselves. Judging from what little I could hear of it, I really like the last selection, the “Scott Pilgrim Theme.” Here’s what the band’s Peter Berkman had to say about the song:

I wanted a melody that was both melancholy and triumphant, I wanted it to evoke a sort of nostalgic John Hughes world and the deluge of emotions and gut feelings that present themselves when you’re completely smitten, which Scott Pilgrim undoubtedly is. That’s what the second half of the song is about, the first half is about punching people, obviously.

Speaking of obviously, there will be a soundtrack, right?

Head over to the PlayStation Blog to check out all of the samples.