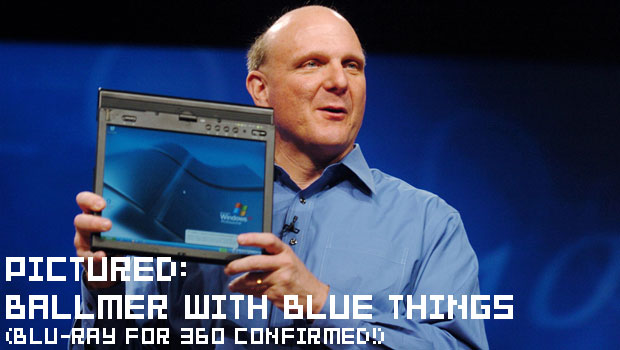 When Microsoft CEO Steve Ballmer talks, people listen. Earlier today, word went around that the executive had confirmed an upcoming Blu-ray player add-on for the Xbox 360 platform. What he actually said was hardly a confirmation at all.

“You’ll be able to get Blu-ray drives as accessories,” he said after stating he felt there was no need to put a drive inside their console.

The media ran with it — “Blu-ray player for Xbox 360 confirmed.” Hell, we even did, too. While the statement is unclear, it’s likely it was misinterpreted; Ballmer was likely referring to standalone Blu-ray drives that would hit the market in general… not for the Xbox 360 in particular. Microsoft, after all, have just begun to up the digital distribution ante with 1080p streaming using the Xbox 360 and the Zune Video Marketplace.

But that’s not to say it won’t or will never happen. We asked EEDAR analyst Jesse Divnich his thoughts on the future of Microsoft adopting Blu-ray technology for its console.

“Blu-ray integration in the Xbox 360 is not out of the question,” he says, “but there will have to be many failing points for that to be true first.”

Divnich feels that in order for Microsoft to even consider it, the digital distribution of high-definition would have to fail. HDTV adoption (currently at 33%), he says, would have to exceed 60%. Blu-ray disc sales would have to overcome sales of DVDs, as well. Even then, he believes that there would have to be a noticeable impact on Xbox 360 sales due to its lack of Blu-ray integration.

“Until then, Microsoft will continue to promote digital high-definition in the attempts to undermine the Blu-ray format as a standard for high-definition deliver,” he says.

As for what everyone had interpreted Ballmer as saying — that there would be a Blu-ray player accessory for the console — he believes it’s possible. But it all comes down to consumer demand, among other factors and variables that are “much bigger than the videogame industry,” including pressure from movie studios and publishers.

“A Blu-ray accessory is also not out of the question,” he does note, “but again, it comes down to what consumers want and until consumers begin to overwhelmingly demand a Blu-ray player accessory, Microsoft won’t make one available.”

When asked, Divnich isn’t even sure that in today’s market, Blu-ray support is a deciding factor when consumers make a console purchase anyhow.

“Blu-ray could be a deciding factor for consumers a few years from now, but currently the majority of consumers who buy a PS3 buy it for its gaming and online content, not for its ability to play Blu-ray movies,” he says. “Blu-ray discs are still 30% more than DVD discs and those prices need to come down before the Blu-ray format becomes accessible to the masses.”

He’s also quick to point out that he’s not trying to trying to paint Sony and its Blu-ray device in a negative light.

“It really does deliver on quality and enhances the movie watching experience,” he admits. “I am just saying, as of today, Xbox 360 consumers are not begging for Blu-ray integration.”

If you’re an Xbox 360 owner, tell us — are you begging for Blu-ray? If you’re a PlayStation 3 owner, was that decision based on the support for Blu-ray movies, or something else?

[Note: During the writing of this piece, Major Nelson has issued a clear and official statement on this: “I wanted to clear something up. Steve was referring to Blu-Ray accessories for the PC,” he writes, adding. “We have no plans to introduce a Blu-Ray drive for the Xbox 360.”]