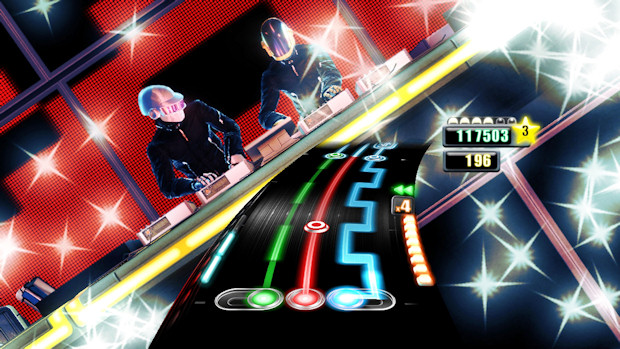 It’s got the “Hero” name and is being backed by the Activision marketing machine, but analyst Doug Creutz of Cowan and Company believes DJ Hero is not setting the world afire as one might expect. The latest addition to the plastic toy instrument genre is said to be suffering from an alleged slowdown in music game sales, something that not even Daft Punk can counteract.

“On DJ Hero, despite some recent positive comments from company management about pre-orders, we remain very cautious about the title’s prospects at launch,” Creutz tells investors. “A survey of online retailers indicates a demand profile that is well below what we would have expected to see just a few days before launch for a title that was destined to be a big (or even modest) success.

“… We still believe that DJ Hero will be an important part of Activision Blizzard’s music franchise strategy, but we think it may take a few versions of the game for it to reach its full market potential (similar to the original Guitar Hero).”

I could easily see DJ Hero being the proverbial straw that broke the music game camel’s back. Its rather convoluted premise feels very much like a “jumping the shark” moment, and it wouldn’t surprise me to see it turning people off and suggesting that music games have maybe had their moment in the Sun.

Of course, it also wouldn’t surprise me to see the game becoming a big success either, with Activision forcing it into our brains via its almighty marketing powers. I guess we’ll have to wait and see just how well it does before declaring the music genre dead in the water.