Summer, 1989. I was twelve years old and would basically play anything given to me in the shape of a Nintendo cartridge (I feel lucky now that some cunning bully didn’t find this out and craft my demise cleverely concealed inside a copy of The Legend of Zelda.) One day while perusing the selection at my local game store, I discovered the box for Tombs and Treasure, an Infocom game where I could apparently explore deserted ruins in Chichen Itza. It would be a lie to say I was anything other than excited to the point of mild arousal.

Whether it counts as a “true” RPG or not is purely a matter of choice, since it lacks the exact format of classics such as Dragon Warrior and Final Fantasy, but this game is firmly entrenched in my memory as a game where I played a role I normally never would — one of explorers struggling to solve a mystery within Maya, a real place I very much wanted to go to. Is it worth the dinky music and horrifying graphical quality to go back and play? Hit the jump, my friends, and I will tell you.

Now, Im going to be honest with you. My intention of profiling this game in this edition of An RPG Draws Near was to rip it a gaping new butthole. After all, my memories of it are that I was terribly excited about it and that it let me down big time. I actually remember returning it to the store and telling the man at the counter (who I saw pretty much every day since I was an obsessive game renter) that he shouldn’t rent it to anyone else if he knew what was good for him. I still remember him laughing.

As I do with every game I revisit in this feature, I went back and played Tombs and Treasure before writing about it, and while it has all the awkwardness that we enjoy fostering our gamer love/hate relationships upon, it also had some points that sat well me with me upon a replay. That may be the fault of the same retrogoggles that still make me enjoy The NeverEnding Story even though it’s clearly not a very good film, but as I’m sure you will all agree, some retro entertainment has its own brand of guilty pleasure. 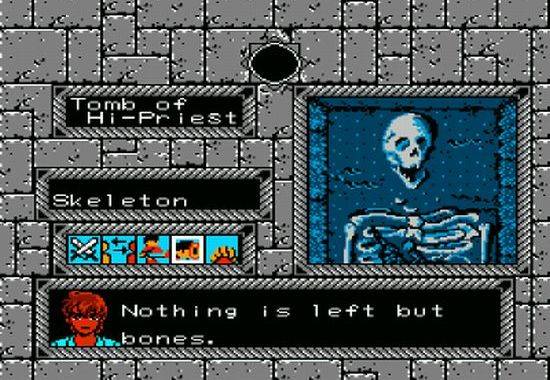 Tombs and Treasure is set in the aforementioned city of Chichen Itza, an ancient Mayan city on the Yucatán Peninsula. You begin with two explorers, a young boy and girl, the latter of whom just happens to be the daughter of a prominent archeologist named Professor Imes. Imes was on a hot lead about an artifact called the Sun Key that was rumored to hold the deepest secrets of the Mayan civilization, but like all guys on the verge of a discovery, he conveniently vanished right before finding it (along with his entire dig team.) The only person left is his guide José, who will join your party and aid its efforts in finding the professor.

One of the coolest things this game had going for it was the locations you got to explore, several of which were based on actual places. El Caracol was actually an observatory the Mayans used to study the stars and create their calendars, and The Well of Sacrifice also made an appearance. In real life, Mayans threw human sacrifices into the well to appease their gods. It really is a shame that kind of thing didn’t make it into modern times; my life would be considerably easier if I could dispose of annoying people and blame my reasoning on religious rituals.

Let me stress that as far as relating to the character you play, there really isn’t much of that to be found here. While the adventures of the group are often interesting, the boy is kind of a nameless automaton that you are supposed to experience the gameplay through. Sometimes I don’t mind this, so it didn’t really affect my play of this game, but if you are looking to care about your character, this is not the story for you. Of course, the NES probably isn’t the console for you either, considering that emotional involvement with your characters was kind of nil in the time period during which the NES was popular.

Having discovered a love of Infocom’s text adventures long before discovering this title, I had no problem at all adjusting to the format of exploration, which is reminiscent of text-heavy Kemco games like Shadowgate and Dejá Vu when you aren’t on the world map. Since I fell in love with text games at a young age and therefore forfeited all hope of making any friends, this was just my cup of tea. Dorky menus with actions like push, pull, kick, punch and knead? Delightful. I felt right at home (and so what if knead wasn’t really in the game’s action list? It should have been, dammit). 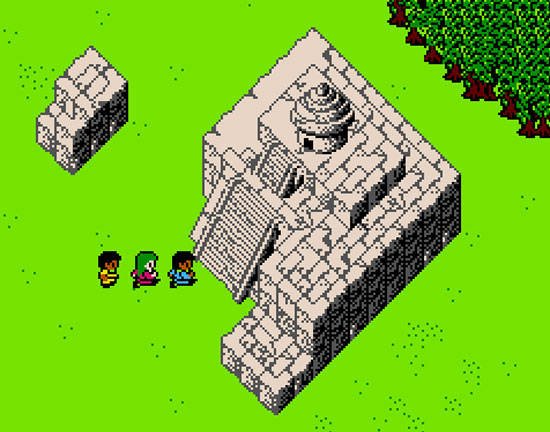 The gameplay is mostly puzzle-based, but you will have some battles, mostly taking place inside the ruins that you will explore. In similar titles, any encounters are usually ended with the use of an object or three, usually combined in a way that you can only imagine by using the absolute opposite of logic (a carrot plus a raccoon liver equals the striped javelin of organic terror.) In Tombs and Treasure, you actually use a weapon in turn-based combat, which is where that confusion between adventure game and RPG comes in. It’s simple stuff though, and you either kill your opponent or run away until you’ve leveled up sufficiently and then return to continue the good fight.

A friend listened to me replaying the game and described the soundtrack as “acrid.” It’s pretty laughable when you put it that way, but most NES music probably falls under this category. At the time I played the game, of course, I thought it was fine. As for what I think now, well, I think it fits the look and feel of the game just fine. It’s bleepy, but I really can’t complain about it much — I have a pretty soft spot for most all types of game music, regardless of the time period.

I think the biggest struggle in writing about this game was not to judge it through the lens of my childhood. After more self-examination than any normal human being should ever go through over an NES game, I realized that I was more in love with the idea of this game than I ever was with the actual title. If it was 5 bucks on the Virtual Console and the other game was Nightmare on Elm Street, would I tell you to get it? Yes, I would. Of course, I’d advise you to stab yourself in the face with a sharpened curling iron before I’d tell you to play Nightmare on Elm Street, but that’s another story entirely.

Replaying Tombs and Treasure was a good experience in that it paralleled my past memory of it with my current experience. It made me realize that it’s well worth it to love a good idea in a game, even if the execution falls flat on its own face. It may plant the seeds of your taste in games in a way that’s more permanent than you realize at the time (whether it already happened with old games like this in your past or is happening now with new games daring enough to choose something different when it comes to tone and setting.) Even though the format is jerky and awkward to replay as far as we’ve come in gaming’s history, this one isn’t 100 percent crap…just mostly. 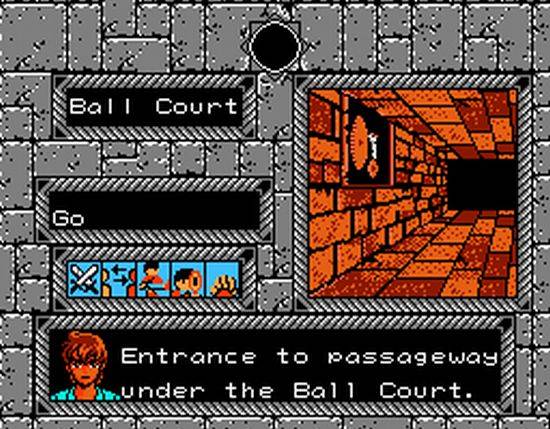 >Attack: If you were the kind of kid that loved reading, world history, and maybe dreamt of becoming an archeologist at some time in your life before realizing that meant you would spend more time begging for project fundage than you ever would finding actual relics. Also, if you played it as a kid and want to remember what it was like, you might enjoy it. For five minutes.

>Parry: If you hate retro games, enjoy characters who you can relate to in some way, hate the early PC adventure format, think that three kids exploring pyramids is as likely to happen as the meeting the Loch Ness monster at your local Starbucks, and just about every other conceivable rational or non-rational reason you can possibly dream up. In other words, parry.

[This article is dedicated to EternalDeathSlayer, who reminded me of something important I forgot in the comments of a previous post. Thank you. – C]