Hardcore RPG gamers are the essential opposites of hardcore FPS gamers. While FPS gamers love competition and frequently strut their high scores, RPG gamers tend to enjoy solo play and not eyeball their numbers as much (or for the most part, ever.) It’s hard to imagine both groups mushed together under the same term. They do share one thing in common, however: both are just looking for a great game.

It’s commonly said that RPGs have, for the most part, become formulaic and dull. While the topic has been discussed to the death on many a forum, one of the most popular schools of thought is that the advent of next-gen graphical capability has actually taken away from RPGs rather than lent to them. I can’t say whether this is true or false, but all technobabble aside, just give me a good story to play and I’m happy.

In the feature An RPG draws near! I intend to focus on all manner of RPGs, from Square’s finest days to the newest efforts of publishers on current consoles. Whether you started playing RPGs before you were in the double digits, or you fell in love recently, its likely you’re always looking for a good one to play. I hope to show you some you missed and remind you of others you loved dearly.

Hit the jump to read about one of my favorite RPGs that took me completely by surprise: Secret of Evermore.

The most commonly praised RPGs usually hail from the Super Nintendo era. From Chrono Trigger to Secret of Mana, these games seem to have provided a golden standard for RPGs that sticks over a decade after their release. Secret of Evermore,however, is mentioned with less frequency, but also offers a similar type of experience to the Square 16-bit RPG formula. 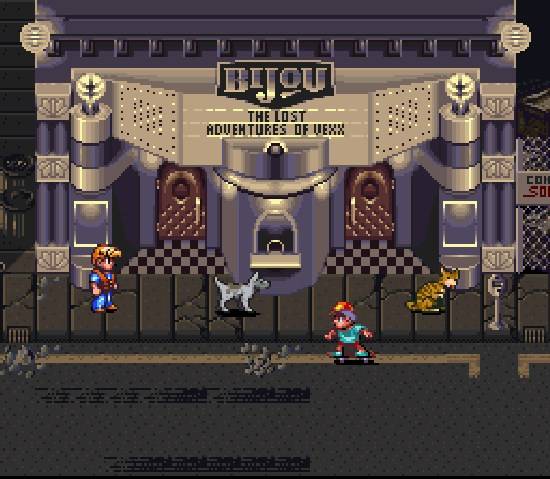 Secret of Evermore places you in the role of a boy and his pet dog, who get hurled into a fantasy universe due to the error of an eccentric inventor. You must go on a quest to find him, or you’ll never see dear old Podunk again! (Yes, your hometown is actually named Podunk.) The controls will be instantly familiar to anyone who played Square’s Secret of Mana, as the same ring-shaped menu and real time battles are used in SOE.

The storyline guides you through the world of Evermore, which is based on separate epochs of world history. The boy and his dog pay visits to Prehistoria, Antiqua (Roman Empire-inspired,) Gothica (Middle Ages,) and Omnitopia (a futuristic space station.) For those gamers who loved the ability to time travel in Chrono Trigger, these locales provide a similarly fulfilling gaming experience. Also, I love any game that throws me into the prehistoric era when I’m not supposed to be there. 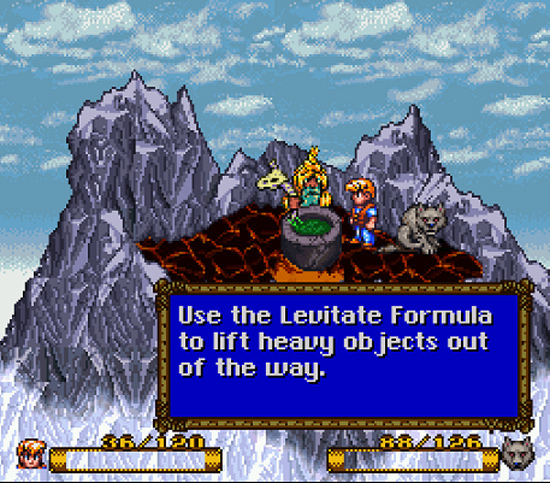 Replaying SOE also made me realize how few real time battle systems offer you an opportunity for actual strategy, not just jamming the action button over and over. Even Final Fantasy XII‘s “Active Dimension Battle” is mostly just the ability to let your characters run around until your gauge is filled — the enemy still always hits you. The choice to evade or take on enemies is completely yours in SOE, and it aids the flow of the gameplay so beautifully that I wish more RPG developers would pull their heads out of their respective asses and reuse it.

Fluid combat aside, the quirk of Secret of Evermore’s characters is what makes the game for me. The boy holds one-sided conversations with the dog, sometimes making geeky references that would make even a seasoned D&D player cringe, but somehow manages to echo the eccentricity of dialogue in games like Maniac Mansion — the characters said weird stuff, but it was unforgettably weird stuff that lodged itself in your gaming consciousness permanently.

While there were many incredible games in the “golden era” of SNES RPGS, Evermore is a true favorite for me — it’s goofy in a way RPGs have forgotten how to be, and yet still remains a completely compelling adventure. I still find it just as much fun to play through as other Squaresoft titles from the same time period, and I find myself wishing more games employed the use of a sidekick such as the dog rather than the cookie-cutter RPG parties.

Not to mention, if you’re the guy at the party who tells the jokes that other people wince over, this game was made for you. 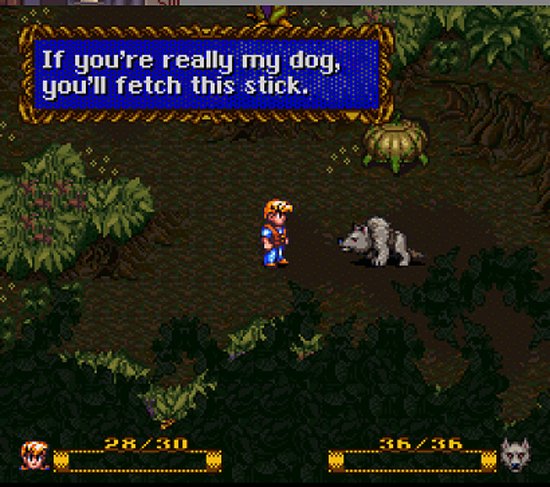 >Attack: if you love 16-Bit era RPGs, are a fan of Squaresoft games and enjoy quirky dialogue and memorable characters. Attack with +2 to strength if you love cheesy jokes.

>Parry: if you need your RPGs with turn-based battles (these are real time,) prefer state-of-the-art graphics and don’t enjoy stories in off-the-wall flavor. Flee if you think boy/dog relationships are revolting.