If you are already a fan of the other games in the series, there’s no question why the excitement is so great for the English translation of Mother 3. Maybe you haven’t discussed or even heard of the game, and reading all these fervent declarations of rapture is a little confusing for you: why is this game such a big deal anyway?

I could tell you that I’ve played them all, and pretend like I am incredibly knowledgeable, but I’m not going to even attempt to fool you: that just isn’t true. All I can share is that I’ve spent a lot of time wandering around the Japanese original wishing I knew what was going on. Therefore, what you are about to read is very much my first real journey through the world of Mother 3; a handbook on the hype, if you will.

To find out what all the fuss is about, hit the jump.

With all the pretty new RPGs on the market, what exactly is it about this old GBA game that is worth the trouble of downloading, emulating AND patching in English in order for me to play it? Such methods do not appeal to the lazy, and even fans of all things retro may not understand what it is about Mother 3 that makes it so special to so many people. I had an inkling, but felt I couldn’t really understand until I had played it in English. Over this past weekend, I settled down to give it a whirl, thanks to the hard work of the fine people at Starmen.Net. 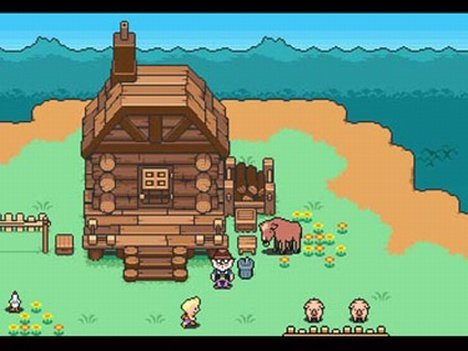 If you’ve never played a previous Mother title (Mother 2 was released as EarthBound in the US), you don’t have to worry: while the games are numbered in order, the stories are stand-alones much like the Final Fantasy series. The thing that ties the three games together are the final bosses, but I leave it to you to find out what exactly those ties are all about.

If you have even a scrap of appreciation for older games, you will quickly notice that this game is absolutely charming. If you are positively fed up with wandering around medieval worlds in your RPGs (I certainly am), Mother 3 presents the perfect solution of a Western setting with a slightly Japanese perspective. It’s basically the polar opposite of generic, from fights to interaction with NPCs.

The story begins by introducing you to multiple characters, all of whom you will either play or interact with during the course of the story. Throughout the game’s eight chapters, you will play as Flint, the father, Dustin, a limping thief, Salsa, the monkey, and finally as Lucas, Flint’s son. Through their adventures, you discover that Nowhere Islands (the land in which the story takes place) has been invaded by the Pig Mask Army and you must fight to save it.

Creator Shigesato Itoi embraces a quirky sense of humor, and it definitely shows in the title. Everything from saving your game by talking to frogs to reports on the inactivity of NPCs that fight with you is absolutely charming, and you’ll find a smile plastered across your face while you play more often than not. 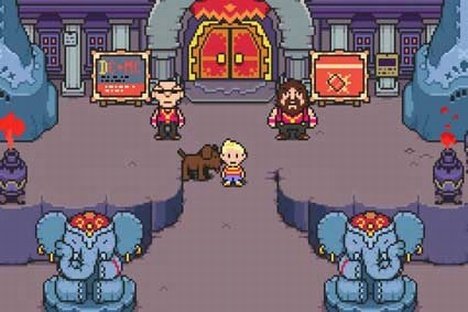 That’s not to say that the entire game is a bucket of laughs. The slogan for the game’s Japanese release was “Strange, Funny and Heartrending”, and it most certainly is all of those things. Fans of EarthBound have definitely noted that Mother 3 is a darker game despite the humor, and while it balances well, expect to be shaken up. This is not a game afraid to make you feel something (which makes me love it all the more).

So how does combat work, you ask? Well, you’ll recognize the basic, turn-based format if you’ve played any RPG, but not only are the battles quick and fluid to move through, but the things you fight are hilarious. Sure, I may have to fight forty dung beetles before I can move forward, but if you can keep me amused while I do so, grinding feels a lot less like a chore. I really appreciate that in a title.

In addition, you have an optional method of fighting that is one of more clever twists I have seen in any turn-based title: the Music Combo system. Each enemy you encounter has their own theme, and when you attack, you can score combos by pressing the A button along with the beat of their theme. Sometimes the tempo varies, challenging the player to keep up. Sure, you don’t have to use it at all, but considering you can score up to a 16 hit combo by using it, you might want to get your foot to tapping. 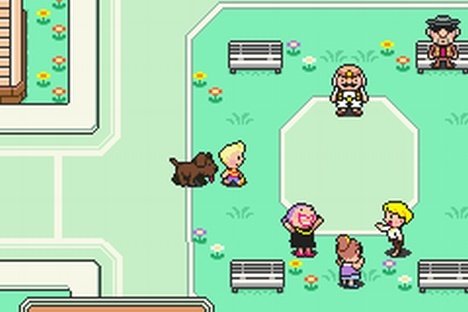 After spending some quality time with this game, I feel I can honestly call it the antidote to the common RPG syndrome. I love the Final Fantasy series, but since it favors a serious dramatic route, there’s rarely room for laughs. The execution of the humor in Mother 3 (and how elegantly it intertwines with more serious events) is truly what makes the game a masterpiece.

I don’t care if you have to borrow, beg or steal to get your hands on it, but any fan of retro RPGs that has not played this game really must do so. Actually, I do care if you steal — you should buy a copy and then download the rom and apply the English patch. Much like my Super Famicom copy of Chrono Trigger, you may not actually be able to play and understand the original, but there’s a talismanic power immediately granted to all gamers by simply owning that original cartridge. Frame it and put it up in the bathroom. I call that art.

>Attack: Immediately. Stop reading this article and go get it right now. As an RPG fan, you should be ashamed of not having the experience of this game under your belt.

>Parry: If the same recycled medieval settings are your bread and butter. Even if they are, try to be open-minded and get this game anyway.It’s simply not to be missed.