Alundra is a game which I have purchased on no less than four separate occasions. It seems that nearly every time I have felt the urge to pop it back into my PlayStation, the disc is nowhere to be found and the impulse to play becomes an uncontrollable obsession.

This pressing and urgent need to play this game at the very moment the mood strikes should be apparent to anyone who has had the experience before. It is a finely crafted action/RPG with a plot the likes of which I had never seen before in the genre. Come with me as I explain why this is among my favorite games of all time. 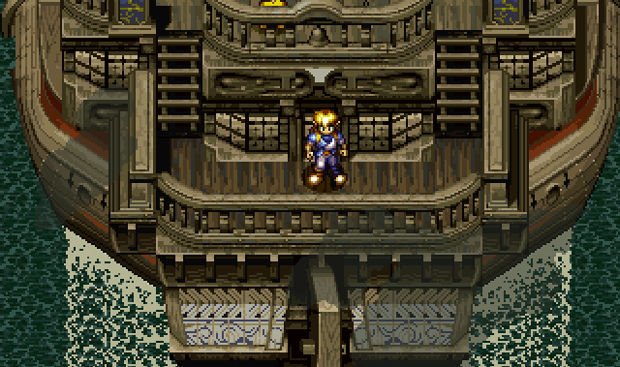 For a game which ultimately feels fresh and innovative, Alundra begins with the one of the most cliché openings in videogame history. Driven by dreams he does not understand, the titular character is traveling on a ship named The Klark to the village of Inoa. As the ship approaches port, the elfin Alundra has a nightmare in which he is given a dire portent of doom from a great wizard and awakens to find the ship hurtling to its destruction.

Shipwrecked, Alundra is discovered by Jess, the kindly blacksmith of Inoa, and taken in. Upon awakening, he comes to discover that the people of this once peaceful village are being cursed by nightmares. The dreams are causing physical illness and trapping the souls of people within their own subconscious. Desperate for a solution, a researcher who has come to the island seeking a cure meets Alundra and observes a scar on his forehead. This signifies to him that Alundra is part of a forgotten legend and has the ability to transfer his consciousness into the dreams of others and release them from their torment. 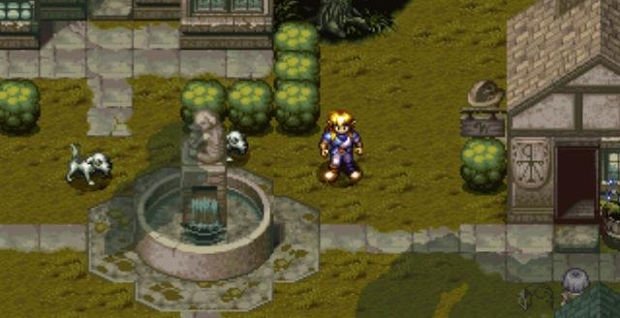 We’ve seen all of these aspects of the story countless times in games. Frankly, the set-up feels almost directly ripped from the beginning of Link’s Awakening (save the motivation and purpose of the hero’s quest) and the similarities don’t end there by far. This game is straight-up ripped from the essential gameplay elements of the Zelda series. There is a group of powerful artifacts which must be collected to seal away an ancient evil, a number of powerful weapons used both to defeat monsters and solve puzzles and dungeons filled with unrelenting foes. 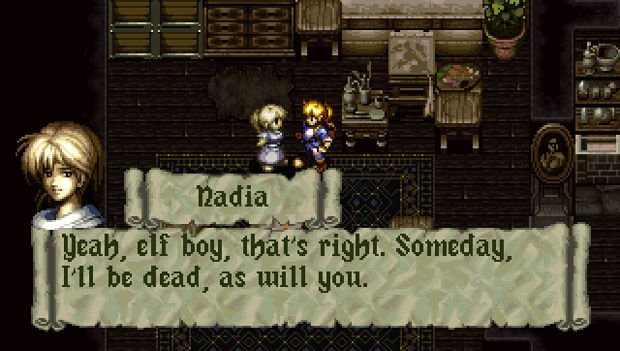 Where it differs is in the utter lack of fear displayed by the developers in telling their story. The people of Inoa are frequently deep characters with their own goals and passions who question why fate has chosen for them to suffer. They are heartwrenching in their pain and those who still have hope for the future have that feeling constantly challenged and, all too often, defeated.

Death and loss are major themes woven throughout the tale and Working Designs is unflinching about demonstrating that. Characters you care about will meet a cruel fate and cause you to wonder if all your hard work will be for nothing. At the same time, the writing and characterizations are so strong that you want to save them that much more and what begins as a fairly standard adventure becomes a very personal battle against evil. 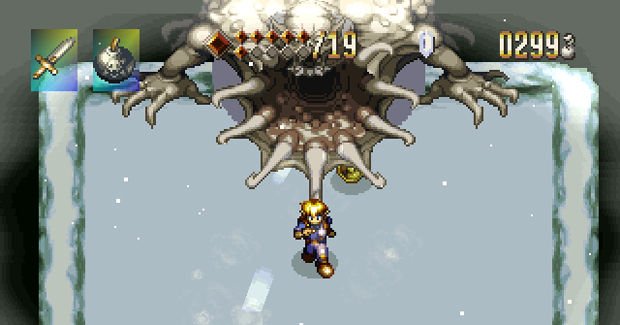 Dungeons in the game are divided into two different varieties. Along with the standard levels which you must seek out in the massive overworld, there are also the villager’s nightmares to contend with. These are tailored specifically to the characters who have them and often represent their deepest fears and regrets. It’s a powerful mechanic for both character development and story pacing.

Most games which follow this design aesthetic stick to the tried-and-true exploration methods: Travel the map until you find a previously inaccessible area to explore, find its local dungeon, defeat a boss to gain a new item, rinse and repeat. The nightmare levels break that flow deliciously and are engineered specifically to reinforce your desire to succeed and remind you of the odds of Alundra’s success.

Regardless of what type of level you are traversing, all are packed full of clever and challenging puzzles and deadly enemies. The puzzles are so good, in fact, that it is not uncommon to have to spend a few minutes pondering how to solve them. Failure often means returning to an earlier point in the dungeon and having to fight your way back or, worse, perform difficult tasks again and you will quickly learn to take your time in approaching them for fear that you may not get a second opportunity as your life is cut short by the denizens which inhabit these dark places. 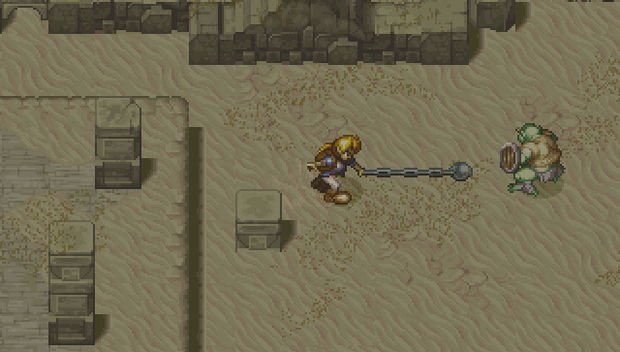 One aspect in particular is highly frustrating to deal with, however. The environments are designed using a tile system in which elements are stacked one on top of another to give depth. Nothing particularly novel, but the design team decided to make jumping a major component of the game and, frankly, Alundra isn’t very good at jumping. The tight and responsive controls which are so frequently helpful for making quick turns when surrounded by foes work against you when hopping from platform to platform and many areas involve jumps which must be performed with absolute precision in order to succeed.

In addition, the perspective the game uses will screw with you. Because of the tricks it uses to create a sense of a 3D world in a 2D game, such as the angle of the camera and the aforementioned tiles, it can be very difficult to determine exactly where on the vertical plane platforms actually are when you’re jumping towards them. Any leap towards the top or bottom of the screen becomes one of faith as you hope that where you’re jumping is actually at the height you perceive it to be and that Alundra successfully clears the distance.

The jumping mechanic ramps up the difficulty considerably but can make the game so frustrating to play at times that controllers around the world pray to grow wings as they are hurled across rooms. Worse yet, the challenge of making these leaps doesn’t manifest itself until you are already so invested in the world and characters that abandoning them due to a failure to master its controls seems unthinkable. 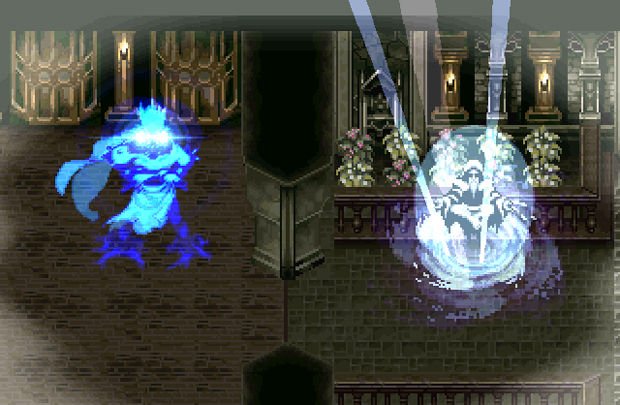 Since this is a game that uses sprites at a time in which most titles were making the jump to 3D polygons, it looks fantastic in comparison to a lot of its peers, especially years later. While other RPGs from the PlayStation generation have a terribly dated appearance in comparison to what is available today, this still manages to look fantastic. Great care was taken to animate characters and the visuals feel epic and beautiful. Alundra‘s music too sounds amazing. Distinct songs accompany every area of the game with gorgeous, mood-setting arrangements. It can effortlessly make you excited, pensive or sad on a dime and is a perfect accent to the experience.

I really can’t sing the praises of Alundra enough. It is one of the finest examples of action/RPG gaming that I have ever had the experience of playing and deserves to be resting on a shelf next to Secret of Mana and Chrono Trigger. Fans of the genre will find much to love here and I heartily recommend it to anyone who may have missed this utter gem of a game.

>Attack: If you like Zelda, this is an absolute must-play. Perfect for players who crave a compelling story without the extensive length or grinding aspects in most RPGs.

>Parry: Alundra is hard and extremely frustrating at points. Players who have a short fuse or are easily frustrated may want give this one a wide berth or risk destroying their hardware out of blind rage.