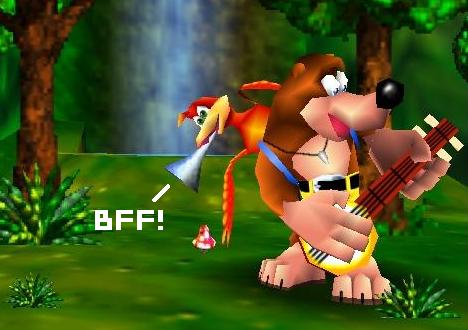 I’m not going to lie: While I loved the extended bit I got to play at this year’s E3 and am excited for the workday to end so I can rip open my newly purchased copy, I have mixed feelings about today’s release of Banjo-Kazooie: Nuts & Bolts. I am fairly confident everything will turn out fine (maybe even great!), but I have such fond memories of the original game for the Nintendo 64 that it is hard for me to fully get behind this sequel’s wacky new vehicular gameplay.

And the argument about a classic series just evolving doesn’t work with me. Are you honestly saying that no one would say a word if a new game in the traditional Mario series came out and it turned out to just be a glorified Mario Kart with slight platforming elements? People would revolt!  Tradition goes a long way concerning classic franchises.

While I am not nearly that upset about Banjo-Kazooie’s new direction, I want to close my eyes and remember the good old days before I go home and pop this new, shiny Nuts & Bolts disc in my Xbox 360. Hopefully everything will end well, but, just in case, let’s revisit a time when Mario was temporarily dethroned as the platforming king by a cute little bear and his sassy bird buddy.

Hold my hand and hit the jump for a (hardcore) fan’s ode to one of the most entertaining games ever created.

Released in 1998 for the Nintendo 64, Banjo-Kazooie had some pretty big shoes to fill. Just two years prior the entire world had fallen in love with the critically adored Super Mario 64. Over these first two years of the Nintendo 64’s life cycle, many companies tried to create 3D platformer experiences to rival the classic N64 launch game, but failed (some miserably). Nintendo built an entire controller around Super Mario 64, for crying out loud — topping that game was a near impossible feat.

In the year before Banjo-Kazooie came out, developer Rare took some big risks with the amount of hype they put into their game. The company even went so far as saying Banjo-Kazooie would be to the Nintendo 64 what Donkey Kong Country was to the Super Nintendo. By the time 1998 finally rolled around gamers everywhere couldn’t wait any longer to get their hands on this anticipated platformer.

Luckily, the wait was worth it.

As promised, Banjo-Kazooie lived up to all its expectations — even surpassing some. The game was critically praised and went on to become one of the top sellers for the Nintendo 64.

But what makes the game so perfect? (Yup, I said it: perfect.)

Let’s start with the basics.

First, let me set the record straight: Super Mario 64 is an absolute masterpiece and one of the greatest and most influential games ever created.

But Banjo-Kazooie is better.

In a way Super Mario 64 is kind of like the original Star Wars, with Banjo-Kazooie being The Empire Strikes Back. Both are great — and Star Wars was an absolute revelation at the time — but everyone knows Empire is better. It’s just the way it is.

But what makes Banjo so much better than Mario?

The graphics
Super Mario 64 is no slouch in this department, but there is no arguing that the colors, textures, and overall design are worlds better than those found in the Nintendo 64 launch game.

The controls
While most of the controls are taking directly from Super Mario 64, Banjo-Kazooie just does everything better. Adding Kazooie and her arsenal of special moves only takes the awesome over the edge.

The humor
As hilarious as Mario is (/sarcasm), who can forget Grunty and her henchman Klungo? Or how about Bottles? Or all the “inside” Nintendo jokes? Hell, everything that comes out of that bitch Kazooie’s mouth is amazingly funny. The list goes on and on …

The music
Oh God, THE MUSIC — arguably the strongest thing about Banjo-Kazooie. I will pay someone $500 if they can listen to the opening theme of Banjo-Kazooie without a smile on their face. Do you remember how the main overworld theme would change slightly depending on what level you were standing in front of? Brilliant! All of the music in the original Banjo is so superb that I would easily rank it on a short list of my favorite videogame soundtracks of all time. It really is that good.

Here, check out the opening theme right here to see what I am talking about (and I take full responsibility for all the joyful toe tapping that is about to occur):

And, yes, you will be humming that all day.

The greatness of Mumbo Jumbo

Basic aesthetics aside, Banjo-Kazooie incorporated a gameplay mechanic that really helped it stand out from most Super Mario 64 “clones.” While I would argue the game would still be amazing without it, the inclusion of the Mumbo Jumbo transformations really took the superb quality to the next level.

On most levels, Banjo could enter a hut owned by the creepy shaman Mumbo Jumbo. By standing in a specific spot (and with the right amount of Mumbo skulls), Mumbo Jumbo would change Banjo into a variety of forms — a different form for each level. One thing that was particularly cool was how each form seemed to relate the level Banjo was on: a walrus for the ice level, a crocodile for the swamp level, and so on and so on.

Each of these forms controlled completely differently and added a huge amount of variety and challenge to an already exceptionally robust game.

Quick moment for discussion: What was your favorite Banjo transformation?

Unlike most people, I love collecting things in videogames. Actually, I am admittedly addicted to it.

And for a hardcore collector like me, Banjo-Kazooie is a dream come true.

Achieving 100% is a chore, sure, but when the process is so entertaining and rewarding … who cares?! Banjo-Kazooie is the rare game that genuinely makes collecting fun. And I applaud it for that.

A breath of fresh air

Do you remember the first time you played Banjo-Kazooie? From the slightly askew humor to the remarkably memorable characters, everything just felt so new and different. Sure, the gameplay was basically a more evolved version of Super Mario 64, but the overall game felt like a breath of fresh air.

Think back to the incredible level design. Do you remember the massive level that requires Banjo and Kazooie to travel through all four seasons? How about the remarkably creative quiz show right before the final boss? And of course the infamous Stop ‘N’ Swop! All of these things, in my mind, are the definition of perfect game design. There have only been a small handful of games since that have come close to duplicating this level of creative genius.

In two weeks the original Banjo-Kazooie will be released for Xbox Live Arcade (with its stellar — but not as perfect — sequel, Banjo-Tooie, coming early next year). If you haven’t played it, please do yourself a favor and download it once available. And if you can, play it before you dive into Nuts & Bolts. From the little I have played, there are numerous references to the first two games in the Xbox 360 sequel. The humor is so great and self-referential at times that you owe it to yourself to be as informed as possible.

Like I said before, I have high hopes for Banjo-Kazooie: Nuts & Bolts, but am worried that the charm and, I don’t know, vibe of the original game might be lost in this technological translation.

If all goes well, I will finish this next battle with the evil witch Gruntilda feeling just as satisfied as I did ten years ago.

If not, I will at least have my overwhelmingly positive memories of the original to keep that smile on my face.