If it weren’t for Yoshinori Kitase and Motomu Toriyama, I’m pretty sure I wouldn’t have a childhood, or at least not a good one. These two men lifted the Final Fantasy series from its humble beginnings into the age of the 3D cinematic JRPG. Hell, they practically defined it.

Before the Tokyo Game Show began, I got to visit Square Enix’s headquarters and talk to these two men. After I wet my pants and quickly sat down, I asked them some burning questions about the possibility of a first-person shooter in the FF universe, the link between Final Fantsy XIII-2 and Chrono Trigger, and Kitase and Toriyama’s favorite victory dances. 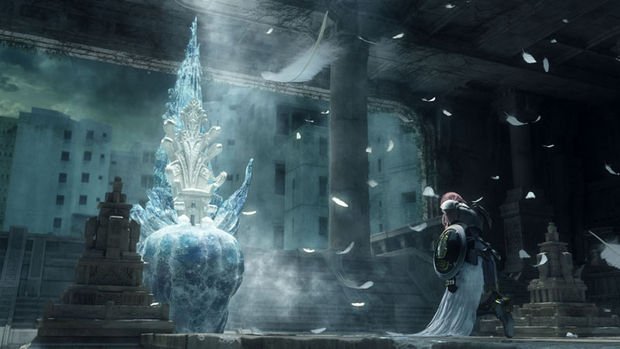 You two have worked together for a while now. How would you describe the dynamic between you two? How has it changed over the years?

Kitase: I don’t think our relationship has changed over the years so much, but through the production of XIII-2, there were some changes I noticed about Toriyama-san. Things are different from the way we were making games 10 years ago. Now, Toriyama-san is more open to new ideas and also taking inspiration from the Western industry on how to make games.

When was it decided to make a sequel to Final Fantasy XIII?

Kitase: After XIII‘s worldwide release in March 2010, we have been enjoying its success. After its release, we decided (in April) to make a sequel.

Was this sequel always intended to be a game and not a film, like Advent Children?

Toriyama: Making a film instead wasn’t one of our options, because after the release of XIII, we got lots of feedback from Japanese gamers. We wanted to rectify those negative aspects about the game, so we were very keen to make a sequel in which we made the necessary changes.

What is the idea behind XIII-2‘s Live Triggers [Dialogue options the players can choose, a la Mass Effect]?

Kitase: We wanted to enable to player to express their own preferences and their preferences would tie in directly with the narrative. With Live Trigger, we are hoping to help the player get more involved with each conversation. By making a choice, the conversation develops in different ways. Even when the situation is quite serious, you can give a comedic response and change the tone. You can also change the depth of information you receive, based on your response. 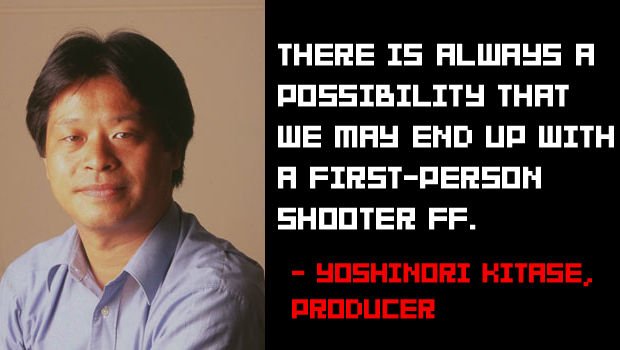 Mr. Kitase, you worked on Chrono Trigger and now you are doing another game about time travel. Are there any direct influences from that project?

Kitase: Yes, obviously Chrono Trigger tackled the same subject. This is a quite popular subject that has been employed by films and other media as well. The Final Fantasy franchise has never dealt with this theme, so we wanted to express an original take on it — different from how Chrono Trigger expressed it.

What was the discussion around bringing moogles back into the series like?

Toriyama: Moogle was in XIII but only as a mascot of a shop. Fans said they’d like to see them more often in the game, so putting them in was our response to fans. Moogles originally weren’t featured that heavily in the game, but now they are involved with most main features in the game and it is a very important character.

Whose idea was Chocolina [A woman dressed in a chocobo suit who sells items in XIII-2 and was the subject of much talk among journalists after the demo was over]?

Toriyama: She seems to be very popular! We placed a shop in each area and time. We wanted to design a shop assistant that is very easily recognizable, so we came up with the idea of dressing up the shop assistant girl as a chocobo. The overall tone of the game is quite serious, so we wanted to offer opportunities where the player can have a break, in a way. I thought she helped add some comedic relief and changed the tone of the game. 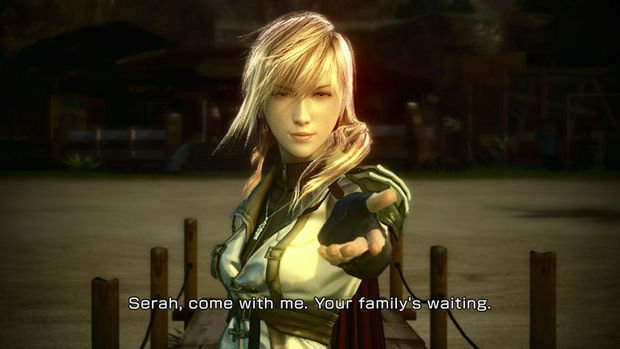 The music in this game, along with the previous one, is really peaceful. I could fall asleep to it (in a good way)! What was the inspiration for it?

Kitase: For the music in XIII-2, we invited composer Masashi Hamauzu to express his own style. He is very good with an orchestra sound and is also well-known for having a feel-good, pretty sound. Also, XIII was the first FF title for HD consoles, so we took to a more ambitious fusion sound. Overall, we were satisfied with the soundtrack. For XIII-2, we continue to take a similar direction. Having said that, the Japanese version of the game has some hip hop and heavy metal music for boss battles. We have taken more inspirations recently and have included a wider range of musical expressions as a result.

In the past, Mr. Kitase, you have said Final Fantasy XIII was partly inspired by first-person shooters, which you said you are a fan of. Have you ever considered going back and making another Final Fantasy game in the style of Dirge of Cerberus?

Kitase: No one can be that certain of the future of any game or IP, so there is always a possibility that we may end up with a first-person shooter FF. Having said that, XIII and XIII-2 are much faster action-adventure-inspired games. RPG elements, such as strategical actions, still need to be there, so we’d need to create a good fusion between these opposite elements. We can’t predict how the FF experience will seek out such a fusion in the future. I can’t visualize it being completely an FPS shooting game. The strategic element needs to be maintained in any future project, because otherwise, it wouldn’t be FF anymore. 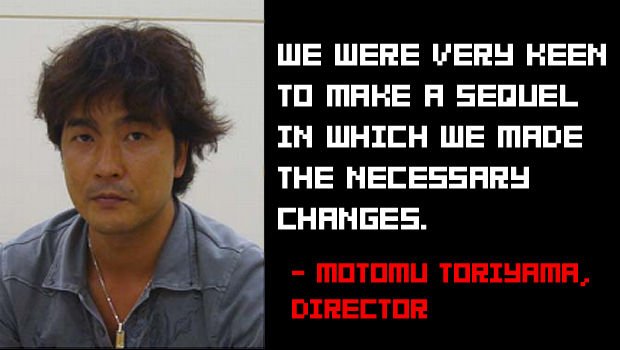 Toriyama: We are in the era of high definition consoles, and graphics are expected to be a lot better and more real, so I think Western gamers in general prefer games with realistic visuals. I think we have always been quite proud of the visuals we have achieved and the high quality of visuals in our works. In that sense, I think Square Enix has always been keeping up with the visual direction the world is wanting, so we have given what Western gamers want, in that extent. Other Oriental publishers may not have achieved that all the time, so that makes me think Western gamers are put off by these games these days.

There were some complaints with the Xbox 360 release of XIII in regards to the resolution not being up to the PS3 version and there being compression problems with the video cutscenes. Will these issues be present in the 360 version of XIII-2?

Kitase: When we made XIII, there were lots of movie scenes, so there were some issues transferring them from Blu-ray to an Xbox 360 disc. The difference was quite conspicuous, but since then, we have moved on and now have more advanced optimization technology, which means many of the scenes that would be expressed through movies can now be expressed as real-time event scenes. We have a less serious issue of memory between the two difference consoles, so I think the difference between the two consoles will be a lot smaller now. 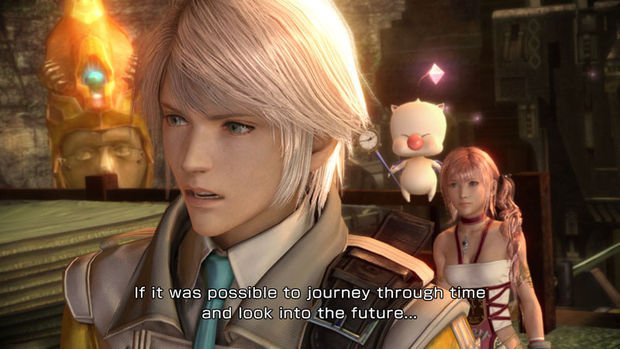 Does revisiting a previously established Final Fantasy world excite you? Do you have any interest in revisiting, say, Final Fantasy VII over another? In the past, you said that you wanted to make a sequel to XIII because you liked the universe and wanted to expand it. Do you feel the same way about another entry in the series?

Kitase: If we are talking exclusively about VII, we made a film that was intended to be the sequel. At the moment, we have no specific plans for making any sequels to past FF titles. FFVII was made over 10 years ago, and there are lots of fans that love the game. In a way, they have created their own FFVII world individually, so if we were to make a sequel, we would have to be very careful not to disturb fans’ own individual picture of that universe. It’s a very delicate thing to do. We’d have to tip-toe around it. At the moment, we don’t have any plans.

Toriyama: I like Serah’s in XIII-2 because her victory pose involves a moogle. It’s quite cute and charming.

Kitase: This isn’t necessarily my favorite but it stands out in my memory … Tifa from FFVII. Prior to that time, there were very rough expressions on the characters. This kind of detailed expression was only possible at this time, so it was very exciting to see.

How do you feel about the idea of a first-person shooter Final Fantasy?

Are you willing to give FFXIII-2 a chance, even if you didn’t like the previous one?