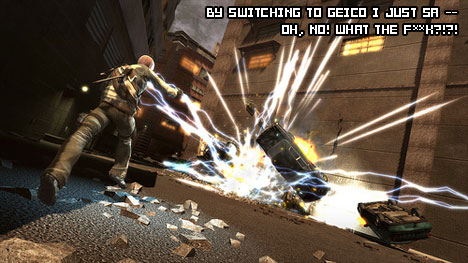 We first saw Sucker Punch’s inFamous at last year’s E3 when Sony revealed the trailer for the PlayStation 3 title. Our reaction? Wait, this is by the dudes who made Sly Cooper?

The third-person sandbox title looks gritty and violent, just about everything Sucker Punch’s thieving racoon is not. Set in the ruins of the fictional Empire City, players take on the role of Dylan, a man mysteriously imbued with electricity-based superpowers. Game Informer recently had a cover story on the title, which we’ll likely be seeing more of at this year’s E3.

Sony is kicking off the hype train by releasing three screens of the game, which ain’t much, but the game is looking damn cool. We would very much like to blow up cars with electric blasts, please. Check ’em out.