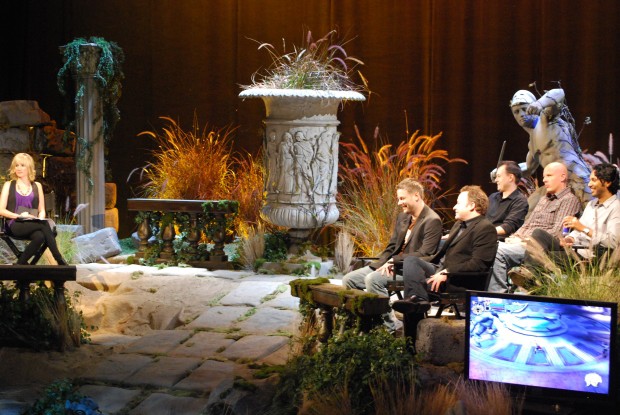 Cory Barlog is officially one of my favorite videogame personalities. David Jaffe was already up there, along with Mark Rein, and a few others. To me, these people are known for their brutal honesty and undeniable personality. Working in this industry and meeting such people is the best part of it, even better than playing games a day earlier than everyone else.

Of course, I didn’t know that’s how I’d feel until after Barlog and Jaffe spent four and a half hours pointing out sexual references, and telling funny stories about their time developing the God of War games. But it wasn’t just these two — the whole of God of War game directors met, for an off-kilter round table discussion slated for your home theater this holiday season.

Hosted by G4s Allison Haislip, David Jaffe, Cory Barlog, Stig Asmussen, Ru Weerasuriya, and Dana Jan — the game directors of God of War, God of War 2, GoW3, GoW: Chains of Olympus, and the upcoming GoW: Ghost of Sparta, respectively — talked about everything from their inspiration to create their games to who would make the best Kratos in a supposed God of War movie. (They didn’t agree, but my vote goes to either Old Spice Mascot.)

Jaffe, known for his outspoken personality, unintentionally stole the show, but his comrades asked for it. For the first hour, every question posed by Haislip was met with a turn of the head and a quiet stare in Jaffe’s direction. It wasn’t until Jaffe got fed up with answering everything that the rest of the team, besides Barlog inputting every witty quip he could, really opened up.

Quite a bit about the God of War franchise came out that night. How Kratos was originally envisioned (Martin Riggs plus Russell Crowe); why his skin was so pale (the unfinished original artwork for Kratos, uncolored with nothing but primer, looked perfect according to Jaffe; what God of War was originally pitched as (Clash of the Titans directed by Ridley Scott); and why Kratos is so likable (“While destroying everything around him, [Kratos is] inadvertently better,” said Barlog. And he’s the ultimate badass)

But perhaps the most interesting bit, which so many people are curious about, is why every game had a different game director. Each had their reasons for stepping aside, but it also gave each new title a fresh start. As Asmussen pointed out, “the first time [directing] is the hungriest.” Both Jaffe and Barlog left to pursue personal ventures, while Weerakjniya gave up his directorial role to run the business side of Ready At Dawn Studios.

Barlog was an absolute treat. Some of his memorable comments include “I build a big level because I can build a big level! Aren’t I awesome?!” and “Athena: ‘I’m gonna take your visions away’, then later, ‘nobody can do that sucka!'” And when Jan was asked how he kept enemies fresh, he told a story of Jaffe’s Napkin O’ Monsters, a restaurant napkin with every character in the God of War series. According to Barlog, “Jaffe draws like a three year old.” Yes, that’s how the night progressed.

Also discussed was the ludicrousness of the series. “Death doesn’t really mean anything,” Jaffe pointed out, as everyone dies yet Kratos himself died twice and escaped Hades. One comical debate compared Kratos to Bruce Wayne. Both fight for revenge and vengance over the anguish of their lost families, but Jaffe couldn’t wrap his head around how Kratos remained so angry.

On their inspirations, the entire team agreed when Jaffe said “go play games you haven’t heard of,” pointing games to Ico and Onimushu. “That’s the hallmark of God of War,” Barlog said jokingly. “We take unknown games and completely rip them off.”

Other unknown tidbits about the series?

The directors left the audience with an important lesson to learn from Kratos.

“Take what you want, and damn the consequences,” Barlog said. “If you want it, take it. And if you love it, people will follow you.”

Filed under... #God of War#PSP