There’re few things quite as enjoyable as spending a rainy afternoon indoors, playing a fantastical adventure game. I recently got my grubby mitts on a preview code for prolific adventure game studio Daedalic’s upcoming magical romp, The Night of the Rabbit, and sought sanctuary from the gloomy Scottish spring inside Mousewood.

Outside of my flat it might have been wet and cold, with people scurrying about under umbrellas, but inside I was chatting away with eccentric mice, defending an adorable owl chick from a malevolent crow, and learning how to be a magician in a gorgeous, sun-dappled forest. It’s a hard life. 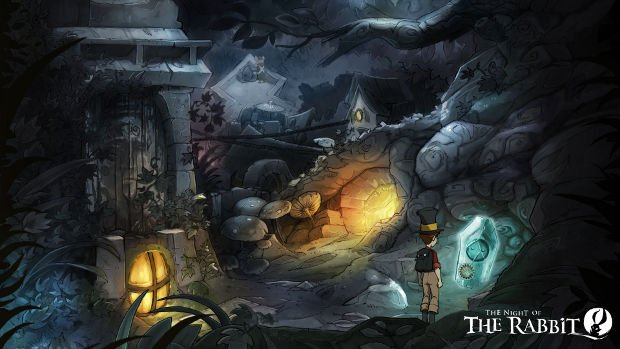 With only two days before the end of his summer holiday, Jerry Hazlenut is desperate for one last adventure before he goes back to the world of chalk and blackboards, and an invitation to become apprentice to a large bipedal rabbit magician, the Marquis de Hoto, gives him just the opportunity he was looking for.

The Night of the Rabbit is shaping up to be a delightful journey through lavaishly detailed magical realms, and even manages to contain a protagonist who won’t drive everyone insane — unlike Daedalic’s The Whispered World.

My preview code only gave me a look at the first sixth of the game, following Jeremy from his forest bungalow in the modern world, to the Borrowers– and Redwall-inspired setting of Mousewood. It’s an extremely strong start, with logical puzzles, a charismatic gallery of quirky characters, and stunning 2D art.

Daedalic is well-known for filling its titles with challenging, sometimes even obtuse puzzles, but the ones in The Night of the Rabbit appear to strike a balance between common sense and quandaries that will leave you scratching your head for a few minutes.

In my short time with the game, I dabbled in riddle-solving, inventory puzzles, and a few conundrums involving a spot of physicality, and found myself more than satisfied with the variety and quality of them.

However, even early on I found myself weighed down by trying to solve several puzzles at once, and I did wish that the journal — which only chronicles the main story — kept me abreast of the various requests that had been made of me, or the actions I needed to undertake. I don’t have the best memory. 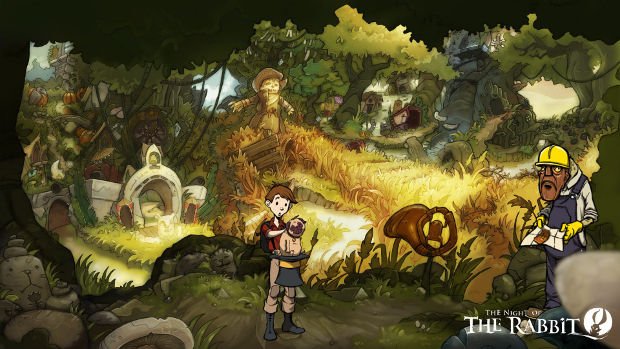 It wasn’t a serious issue, and I always keep a pencil and notepad on my desk when embarking on an adventure — a holdover from the days when even short adventure games could take days to finish due to obfuscation of trickiness.

Hints and encouragement have become popular features in adventure titles of late, and generally I find them to be a bit off-putting and immersion-breaking, so I tend to turn them off, even if it makes the game a bit more difficult. Daedalic has managed to craft such a feature absent these issues, however, and skilfully works it into the game’s narrative.

Jerry gets two tools to help him solve puzzles. The first is his magical coin, which, when gazed through (it has a hole in the middle) reveals objects hidden by magic, as well as any item or person that he can interact with. I appreciate the way it ties highlighting objects into the narrative, but it’s improved even more when it’s employed to solve puzzles.

The second item is Jerry’s wand. The Marquis gifts it to him just after they arrive in Mousewood, and the magical stick allows Jerry to summon his mentor’s visage, wherever he may be, and get some advice. In my playthrough, the wand was entirely useless, and all the Marquis did was repeat his initial instructions, though it may become more helpful later on.

I played for about two hours before the demo ended, somewhat abruptly, and most of my time was taken up by simple exploration of the absolutely gorgeous world and its many charming characters. I confess that even a grumpy sod like me wore a smile throughout the entire experience.

Every area was sumptuous, with giant flora dwarfing the tiny, somewhat chaotic village of Mousewood and its homely wooden houses, a makeshift town clock that can only tell if it’s day or night, and a cake shop — run by a mouse on rollerskates — that exclusively sells healthy herb cakes and sugar-free lollipops (gross).

Though the primary quest was for Jerry to start preparations for in his inauguration as a Treewalker, a magician who travels between worlds, there are quite a few puzzles to solve along the way, most of which, of course, tie into the original quest. 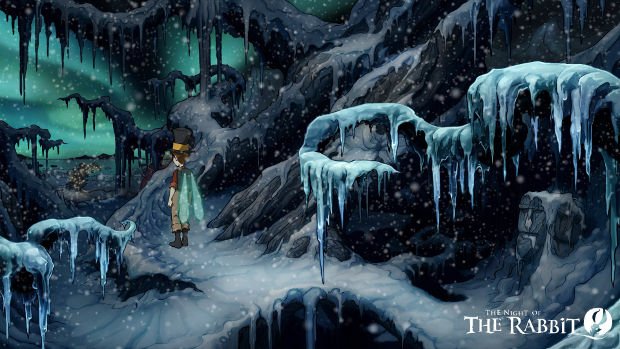 I needed to cross a river to get some juice for the celebrations, but a horrible little spoiled mouse child demanded a toll to cross the bridge, causing me to run around looking for an item to satisfy his sweet tooth. Easier said than done in a town filled with only healthy snacks. After helping the brat, I took out my anger on a foul crow, using nothing but a grappling hook and a radio antenna. Oh, adventure games.

In another part of town, an elderly mouse adventurer needed my help getting his boat, and the hedgehog brothers who were constructing the craft needed assistance to find their stolen tools which had been nicked by a deviant leprechaun. I had to chase him all over the damn place, as he kept vanishing the moment I caught up with him, the bugger.

The Night of the Rabbit drips with whimsy, but there are slightly darker elements lingering in the background. There’s a Treesprite who crops up a couple of times whose intentions are unknown, but he’s certainly an ominous figure, hidden by magic, and exceedingly creepy with his twig body, and shamanistic mask. And then there are the crows, giant birds that have terrorized Mousewood for some time, and threaten anyone caught outside the town walls.

The voice acting is a tad hammy, but it’s mostly solid and at worse a little silly and inoffensive. There are some standout moments, however, notably a radio DJ mole who almost certainly worked for the BBC at one point, and the Marquis, who oozes flamboyance and mysticism and channels at least a small amount of the Doctor of Doctor Who fame, even dressing a wee bit like the Jon Pertwee version.

I tend to enjoy Daedalic’s adventure games, though each contains something offputting, whether it’s the Dark Eye‘s obtuse puzzles, The Whispered World‘s ear-offending protagonist, or Deponia‘s douchey hero, but this glimpse of The Night of the Rabbit contained none of these problems. Here’s hoping it stays that way.