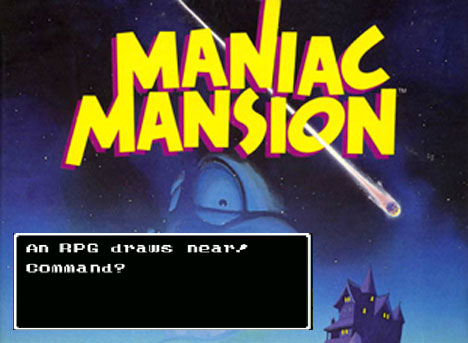 Every time I sit down to write this column, I find myself thinking back to some of my favorite adventures in gaming and wondering if they classified as RPGs. To be hardcore about the definition, an RPG features turn-based battles in which your party can level up their stats. Maniac Mansion does allow you to play with a party, but leveling your characters is not an option. What is it doing here, then?

Like the previously featured NES title Tombs and Treasure, Maniac Mansion falls closer to the adventure category, but since the exploration and interchangeable character elements are so strong, I thought it would fit well here. However, since it’s not a perfect fit, the title of the article is a bit tweaked. If you have never played this game, you owe yourself a trip back to one of the classic titles of the late eighties. You can even play the NES version on Facebook, so I don’t want to hear any complaints about how you can’t find a copy!

There are a lot of wonderful things about Maniac Mansion, but my favorite of all of them is that it’s one of the most peculiar games I’ve ever played (even to this day!). It was notorious for the whole hamster exploding business, which I don’t want to ruin for you, but suffice it to say that at some point it is possible to do so in the game if you’ve got the guts for it.

The story begins simply: Dave Miller (your main character) and a group of friends are standing outside of a creepy old mansion, after hearing word that Dave’s girlfriend was kidnapped by Dr. Fred Edison. After agreeing that you will venture within to save her, you can choose two friends to take with you out of a group of six.

Choosing the characters for this game was not only fun, but also could affect which of the game’s five endings you ended up with (and yay for replayability options!). Syd and Razor are both in bands and look the part, and they also have similar abilities. Michael is a photographer and Wendy is a novelist, and Jeff is a surfer (that latter has very few abilities, which is why I rarely chose him to play with). Bernard, the token nerd, eventually became my favorite character, and went on to star in the next game in the series, Day of the Tentacle.
While the mansion is fun to explore, my love for the game was borne out of the encounters with its aberrant inhabitants, who can land you and your friends in a variety of unpleasant situations. Dr. Fred, the mad scientist, lives in his lab, while Nurse Edna, his wife, makes no bones about letting you know she’s a fan of sexual perversities. You’ll also meet Weird Ed, their son, and Dead Cousin Ted, Edna’s cousin, who happens to also be a mummified corpse. I told you this game was bizarre.

Eventually you’ll trace the evil back to its source, but not before meeting the tentacles, who of course figured prominently in the next entry in the Maniac Mansion series. The story, dialogue and characters stay weird and witty all the way to the end, which is a feat considering the quality of the humor. Of course, it isn’t for everybody, but if you’ve ever thought someone would consider you certifiably insane, this game will probably suit you perfectly.

Although it is more difficult to find the game in its original Commodore 64 incarnation, it should be noted that the NES version was heavily censored to comply with Nintendo’s standards. A fascinating account of the port is told in The Expurgation of Maniac Mansion, where you can find out just how much you missed if the NES version was the only one you ever played.

>Attack: This game is made for you if you love weird titles. The poky controls suffer the passage of time, for sure, but if you play a game because you love a good story, this one’s got it in spades. Maniac Mansion has that trademark quirk that is associated with LucasArts adventures titles, but it also kept me laughing the whole way through, which is a quality I treasure in a game.

>Parry: If you play games more for the controls than the story. The movement of the pointer is incredibly awkward, especially if you play a lot of modern games using an analog controller. Also, if you don’t appreciate stuff like News of the Weird, this game will totally turn you off. Like I said before, not for everybody … but sure to be really rewarding for gamer who always hoped for an opportunity to use an electric cattle prod.