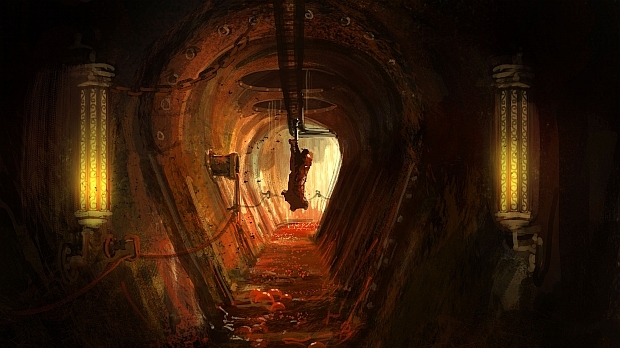 If that headline sounds confusing, frightening, or mildly obscene, it has probably done its job. If the rumors are true, Frictional and TheChineseRoom – of Amnesia: The Dark Descent and Dear Esther fame, respectively – might just be collaborating on a freaky-sounding game called A Machine for Pigs. Which sounds goddamn awesome.

Not too long ago Frictional ran a potato-esque alternate reality game (ARG) campaign teasing its next release. The title is finally out, and it’ll be called A Machine for Pigs, due this Fall. Fans digging into the ARG’s “China” tease, however, seem to have uncovered more, particularly hints suggesting that TheChineseRoom’s own top-secret survival horror game, also slated for a “Q4 2012” release, might be somehow related. None of this is confirmed, but the chain of hints seems pretty solid. Check out a couple of pieces of concept art in the gallery.

Oh, and the phrase fans got after they solved the ARG’s final anagram puzzle?

“The world is a machine. A machine for pigs. Fit only for the slaughtering of pigs.”

Rumour: Amnesia, Dear Esther devs to collaborate on A Machine for Pigs [VG247]