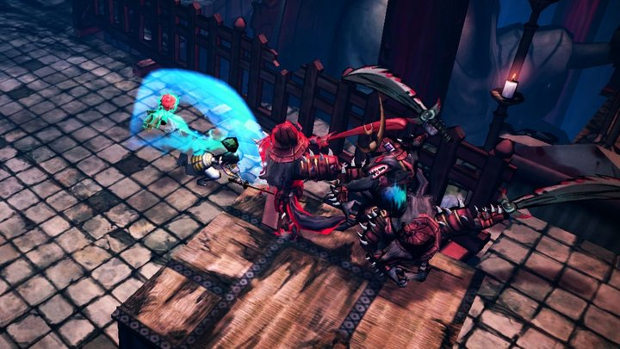 American McGee’s (Alice) Akaneiro: Demon Hunters seemed like a success. It reached a modest funding goal of $200,000 on Kickstarter, launched in-browser, and made it to Greenlight. All this it did a year ago. However, the game is not finished, and won’t be soon.

Unfortunately, between Kickstarter funding and sales, the game only made $300,000, while Spicy Horse has spent $2 million on development, leaving the project $1.7 million “in the hole,” as McGee put it in a Kickstarter backer update.

“The core development team has been reduced in size to just two people,” McGee continued, explaining that progress on Akaneiro would be significantly slowed. If Spicy Horse’s other project, The Gate, does well, the company may be able to allocate more resources towards continuing Akaneiro‘s development.

McGee further explained in a comment on the post that, “the idea that $200k would finish everything was arrived at under the assumption that Akaneiro would sustain itself. It didn’t have to be a runaway success but it needed to cover costs. Unfortunately, what we found upon release was some architectural problems (this is why co-op is behind); issues upgrading our GUI – the one we used was compatible with Unity 4.0 but NOT Unity 4.5 which required redoing the ENTIRE GUI; and feedback that told us the game simply wasn’t fun.”