(Don’t tell her about the crash)

Premium doll company American Girl has revealed a new arcade game-lovin’ gal as part of its “Historical Characters” range. Courtney Moore is described as a “total ’80s girl” who grew up in the sun-soaked streets of California’s beautiful San Fernando Valley. Not only that, but she’s like, totally the best at Pac-Man… Fer sure!

Standing 18 inches in height, Courtney is rockin’ a slew of ’80s fashion staples such as a side-ponytail, a stone-washed denim skirt, a rainbow Walkman, and neon-coloured bangles, bum-bag and hair scrunchie. American Girl is also taking pre-orders on a fully-working, doll-sized Pac-Man cabinet, so Courtney can take on that Mitchell kid everyone’s talking about down at the mall. Gag me with a spoon. 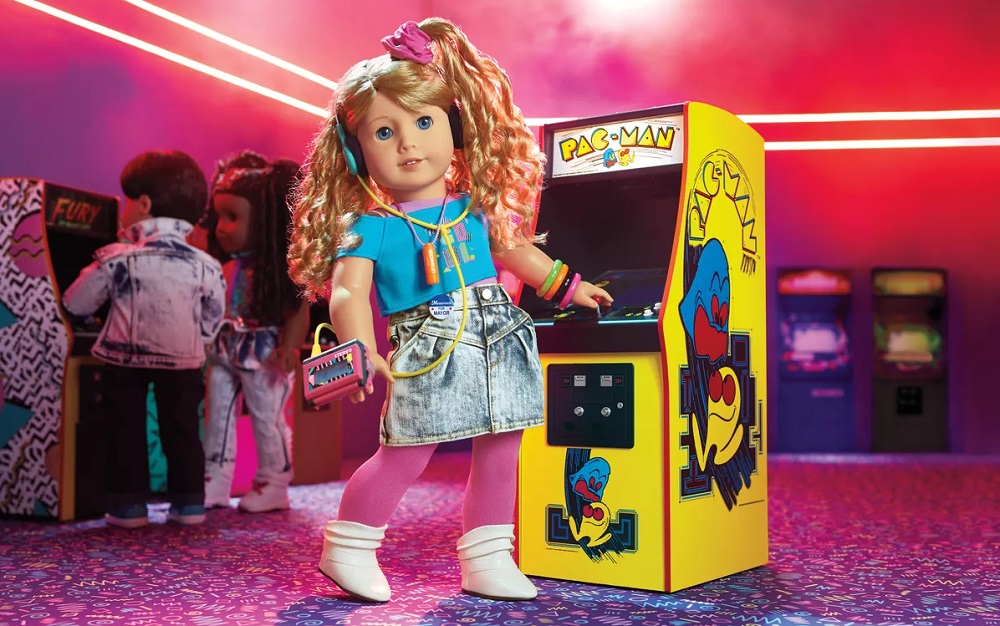 As with all of the dolls in the Historical Characters range, Courtney comes with a storybook detailing her adventures growing up in the carefree days of Cali ’86. While a big fan of video games, Courtney is disappointed at the lack of girl characters on offer, so takes the opportunity to develop her own video game as part of a school project, creating the kinds of characters she’d like to see reflected on the CRTs of her local arcade scene.

American Girl has also announced that it will be matching all of its customer donations (to a maximum of $50,000 USD) to Girls Who Code. This non-profit outfit helps young women from diverse backgrounds study computer sciences through an expansive range of online resources, scholarly sessions, and summer events. In addition, American Girl will be offering $5,000 scholarships to four of the programme’s students. You can learn more about Girls Who Code via the official website.

The Courtney Moore doll, the pint-sized Pac-Man cabinet, and a range of alternate, ’80s-themed outfits, (including some Care Bears gear), can all be purchased from the official American Girl website. Courtney will be available to purchase from American Girl high-street outlets from September 25.