[Edit: The article originally stated that the author had spoken with Breakaway‘s Executive Producer, Matthew Priestley. This has been corrected; the author spoke with the Senior Producer, Michael Willette.]

Last Friday, I visited Amazon’s Seattle headquarters for a demonstration of Breakaway, a competitive team-based game utilizing the company’s Lumberyard engine. I wasn’t sure what to expect, but was pleasantly surprised to find that Breakaway has a lot of potential and is shaping up to be something worth paying attention to.

Breakaway‘s senior producer Michael Willette was present during my demo, and briefly explained what his team was trying to accomplish with their game. Since Amazon owns the Twitch streaming service, they want Breakaway to be as much fun to watch as it is to play. To accomplish this, he said the team’s goal is to make a game that’s easy to follow, but has plenty of opportunities to demonstrate skill. What they’ve come up with plays a lot like a game of soccer or football, with fantasy elements included to add some zest.

Breakaway takes inspiration from several different sources, but manages to combine them into something unique. During a game of Breakaway, two teams of four players each choose a hero to play for the duration of the match, then all eight begin to brawl over an artifact called the Relic. The main object of the game is to carry the Relic into opposing territory and pass, throw or dunk it inside the enemy’s spawn area to score a point for your team. You can also score a point if your team manages to kill the entire enemy team simultaneously or if the Relic winds up in enemy territory when time runs out for a round. The first team to earn three points wins the game.

The game’s visuals are heavily stylized, and none of the heroes could easily be mistaken for any of the others. Every character has a strong, distinct silhouette, and both teams will see themselves as the blue team, so you’ll always be attacking the reds. The four classes are Attack, Defense, Tank and Support, though there’s nothing keeping you from forming a team with three attackers and a support, or two tanks and two defenders. Different team makeups will lead to different strategies, and teams will have to react on the fly to adjust to the opposition’s team composition.

Each hero can pick up and pass the Relic to teammates, and holding onto it grants the carrier a shield that will absorb a few attacks before breaking. Being hit without a shield will cause you to drop the Relic, but holding onto it limits your offensive options. The shield is tied to the Relic, not the player, and is reduced by a certain percentage every time a player passes it off to a teammate. If this causes the shield to disappear, the player will drop the Relic and give the opposing team a chance to make a push. Savvy teams will be able to take advantage of this, forcing the enemy to pick up a low-shield Relic and capitalizing when they fumble. 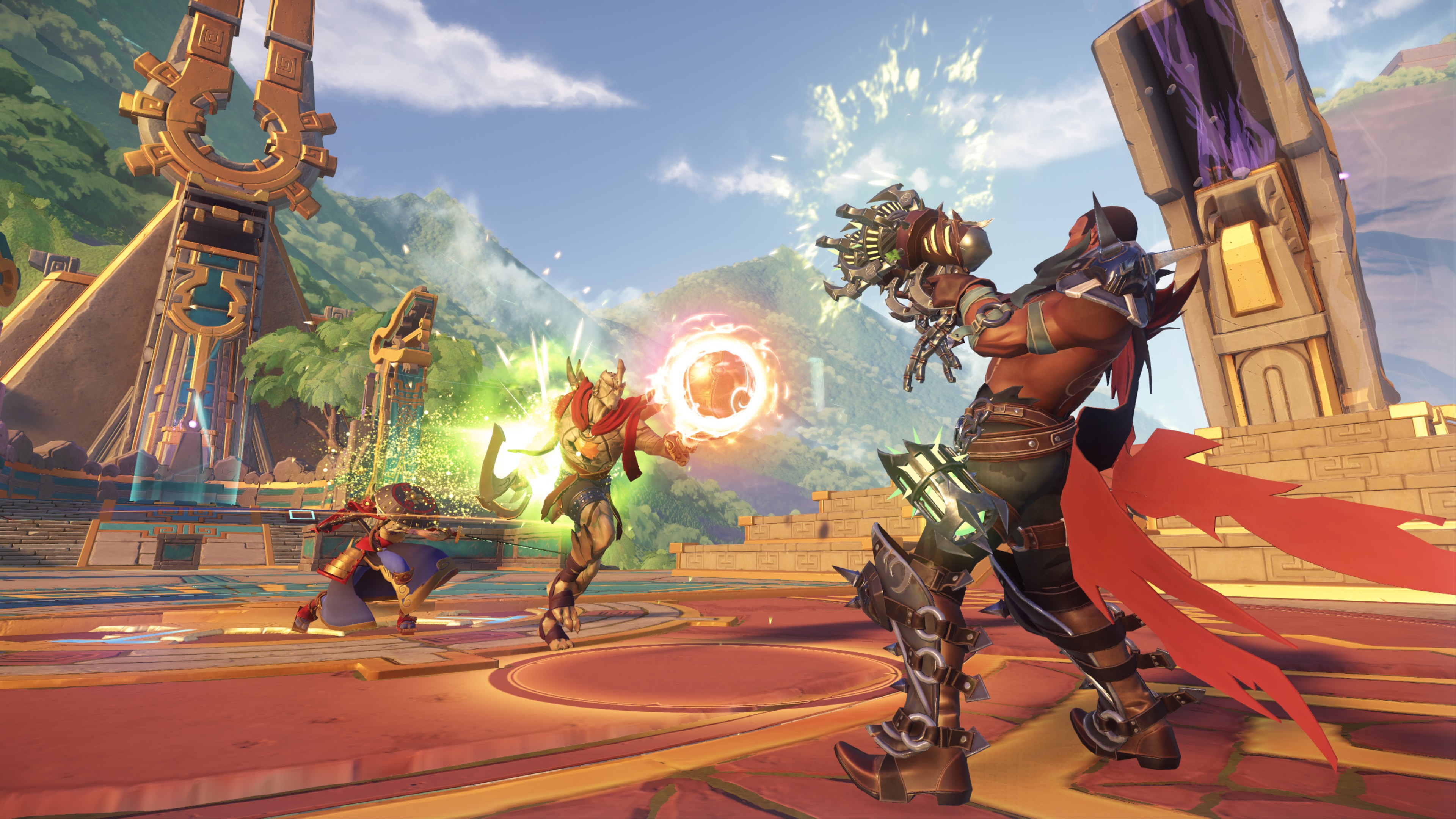 Every hero has unique abilities they can call on when they’re not carrying the Relic, and each of these has a cooldown timer which tends to take longer to recharge the more powerful an ability is being used. Every hero also has a unique buildable they can choose to place somewhere in the arena, and these can shape the battlefield in interesting ways. Thorgrim can build a wall to slow down enemies or force them into a bottleneck, while Kyra can place a turret which will automatically attack enemies who get too close, causing them to drop the Relic if they don’t have sufficient shielding. Some of these buildables can be used to soft counter others; for example Chiyome can place a trampoline her whole team can then use to jump over a wall or Merrick’s spike pit. The buildables can be placed once per round and remain on the battlefield unless an opposing hero dedicates some time to destroying them, so they can significantly change the flow of a match or force a team to adapt their tactics.

Mobility makes a big difference in a class based game like this, and each character can call on some movement skills to help them more rapidly get into position. Every hero can slide on sloped sections of the arena to gain a speed boost, and each has a dash on a short cooldown. While every hero moves normally at roughly the same speed, some have attack abilities that help them move more swiftly; Jarra and Chiyome can both swift strike an opponent, for example.

15 seconds after a round begins, a powerful, team-wide buff will spawn somewhere near the edge of the arena. Collecting it will significantly increase the team’s damage for a few seconds, and it’s easy to see how capturing it could aid a push. 15 seconds later, a powerful defensive boost will spawn elsewhere. If one team collects both buffs at the same time, they’ll become nigh-unstoppable, but if only the attack buff is collected, it can be negated if the other team gets to the defense buff in time. 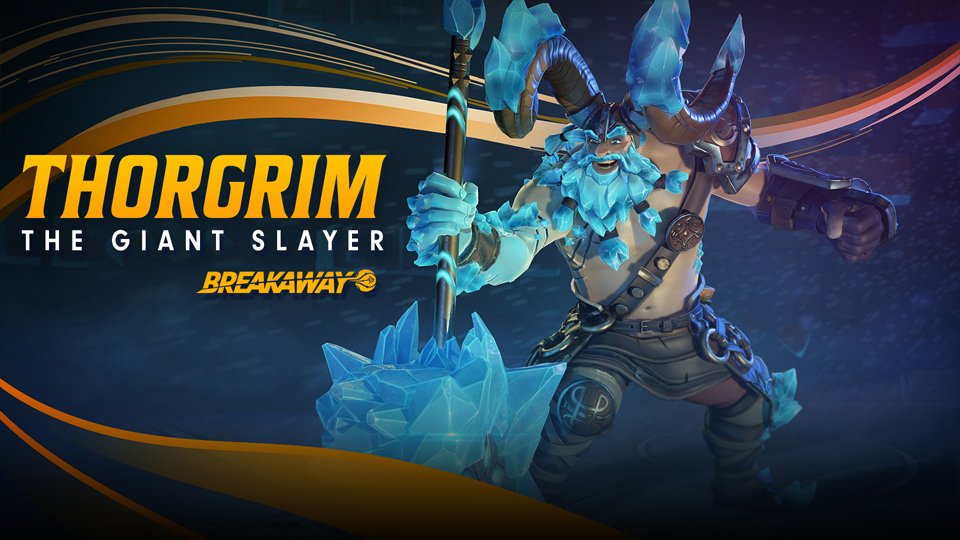 If neither team seems to have an advantage in pushing the Relic forward, you can try to get a point for a team wipe by sending all four opposing players back to respawn at the same time. Every time a hero is killed, their team’s respawn counter gets slightly longer, so it’s often more beneficial to run back to spawn and heal than to fight, die and have to respawn.

The Relic serves as a natural focal point for spectators, but Willette said his team is working to include tools for streamers to allow viewers more control over what they’re seeing. It’s possible to view a match from a top-down view, to jump to an individual hero, or follow the Relic as it passes from player to player. Streamers who want to play with their audience can build a match and use Twitch to allow certain people to join, and statistics can be tracked using Metastream. Future updates may include an instant replay function so commentators can share an outstanding play or analyze a player’s mistake in real time. 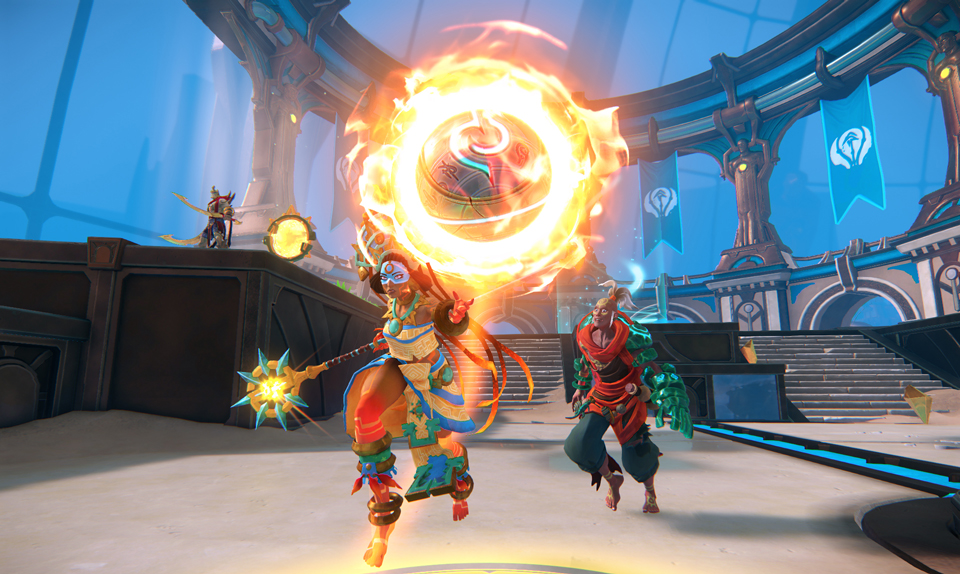 Destroying buildables or killing enemy heroes earns you money which can be spent between rounds to upgrade your hero’s stats. You can buy extra attack damage, defense, health, or even reduce the cooldowns for your abilities or respawn timer. I wasn’t clear on whether the cash earned is shared between teammates or if every player has a personal stash, but I suspect it’s the former. You can’t unlock everything in a single round no matter how well you’re doing, so deciding early on what stats you want to focus on is a pretty good idea.

Breakaway is still in alpha, so it hasn’t been decided how the game will be monetized yet. I did notice the characters we were playing as had the option to select between multiple cosmetic items like skins and taunts, and Willette said a free-to-play model was a possibility. He continued by saying his team wanted to listen to the community and see what players want before committing to a business model. When asked if Amazon intends to sponsor Breakaway tournaments, he gave a similar answer, saying that the company is willing, but would like to see if players even want tournaments before it starts offering up prize money.

Although Breakaway is still early in development it looks like it’s coming together nicely, and there’s already a level of polish I associate with Blizzard’s games. There’s a lot to keep track of, and one of the team’s main goals right now is making the title friendlier to newcomers. I was having a little trouble keeping track of the Relic since there was so much going on, but there’s plenty of time to figure out UI issues before the game goes into beta. Breakaway has a lot of potential, and it’ll probably be inescapable once Amazon and Twitch start putting the full force of their marketing behind it. If you’re interested in trying it out, you can download the current build through Twitch and play the alpha version Thursday through Saturday during September.