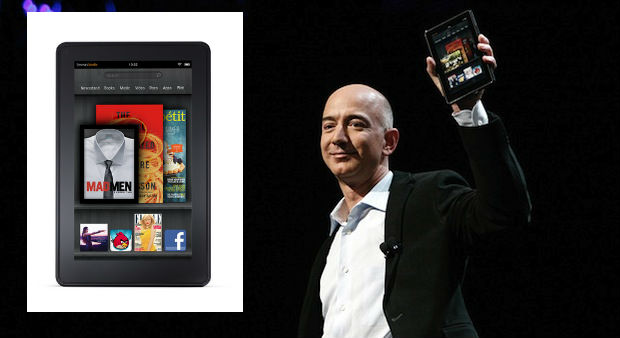 Amazon is getting into the tablet game with the newly announced Kindle Fire. It was revealed at a press conference this morning in New York, where Amazon CEO Jeff Bezos proudly showed off the 7-inch offering. It will be priced at only $199, which had to make the boys at Cupertino wince a bit.

This isn’t some plastic e-reader like the other Kindle offerings. It runs Google’s Android, which is displayed on a full-color IPS LCD display, covered with Corning’s Gorilla Glass. Expect 8 hours of battery life. There’s 8GB of memory and WiFi, too. All data is synced through the cloud, with full access to all of Amazon’s digital offerings.

What you won’t find are all the extras: microphone, camera, 3G. It’s just enough for you to read, browse the ‘net, stream movies and music…and play games. Being Android App ready, you can play games on this tablet. Games like Plants vs. Zombies, Angry Birds and the lovely Fruit Ninja were shown at the event.

If nothing else, this is a kick in the balls to all those other Android tablet makers that are selling devices for $500. Do you see yourself gaming on an Amazon tablet?