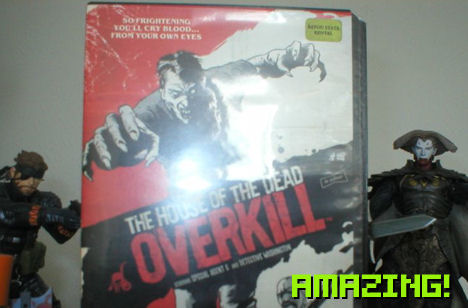 I must admit that when a certain package arrived today, I was a little disappointed by the contents. “A VHS tape,” my inner voice complained. “Who is sending VHS tapes in this day and … wait a minute … this says House of the Dead: Overkill on it. EPIC OVERLOAD!”

Looks like Sega has taken the Grindhouse horror style and totally knocked it out of the park. It might not be apparent on these hasty pics, but the video cassette box has been deliberately weathered and damaged so it looks like it was dredged up from the “video nasty” era or something. Inside is a postcard made to resemble a video tape, but underneath that is one of those T-shirts that you put in water to expand. No time to expand the shirt yet (maybe later) but hopefully the packet is good enough for now.

Sega, I have to say, you’ve pulled an utter blinder this time. This is one of the most brilliant promotions ever.