[For his Monthly Musing, MuddBstrd shows us what life would be like if the progress bars and ranking screens we all know and love from games suddenly showed up in real life. Want to write your own Musing? Go write one now in the Cblogs! — JRo]

A wise person once said that “ignorance is bliss.” Appropriately enough, I have no idea who did.

When I was younger, I couldn’t understand how ignorance could possibly be bliss, or even just a good thing at all. Wasn’t it always good to know everything there was to know? It was one thing to be ignorant because one simply hadn’t been exposed to the information, but to actually prefer ignorance and equate it with bliss? I just didn’t get it. This changed though on that fateful day when humanity woke up to find its perception of the world had been… altered.

I remember when my alarm woke me up that I was so groggy I didn’t even notice the change at first. Like every morning, I somehow managed to stumble to the shower half-asleep. I turned on the water, let out a massive yawn as the water heated, then stepped inside and let the heat wake me up as I went about my automated cleaning ritual. It wasn’t until I finished rinsing the soap off my body that I noticed that words were suddenly floating in front of me in mid-air.

Hit the jump to read more.

“Gah!” I exclaimed in surprise. I stumbled back from the weird floating message and nearly slipped and killed myself. I got my balance and gingerly put a hand up to the letters, which passed right through them. I was so shocked by them that it took me a minute to realize the water was still running. I turned it off, looked back at the message, then slowly stepped out of the shower. As I did, the message faded away.

“That was… odd,” I said to myself softly. After some moments passed, I shook my head, grabbed a towel, and dried myself off. By the time I was clean, I passed it off as a figment of my imagination.

“Stupid late night in the lab,” I muttered to myself as I got dressed. After throwing on a t-shirt and jeans, I went to my kitchen and proceeded to whip up one of my normal breakfasts: yogurt, fruit, and granola. When I finished, another message suddenly popped into the air in front of me. 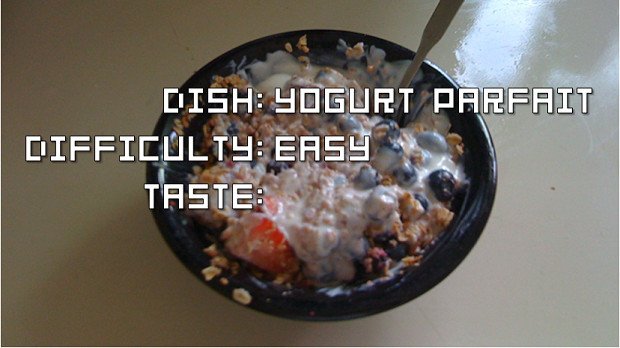 I looked around, but I remembered both of my roommates were gone for the weekend. I looked back at the message and saw that ‘Taste’ didn’t have anything next to it. I looked down at my breakfast, which I guess was technically a parfait, grabbed the spoon, and took a bite. It tasted the way it always did: sweet with a touch of sour, great texture, and refreshing. In front of my eyes, the message completed itself. 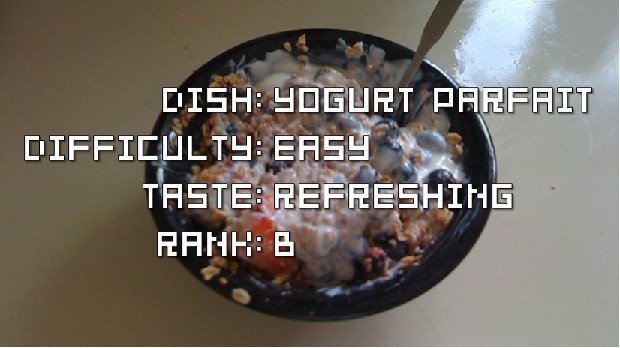 “B? Why only a B…” I muttered with my mouth full, before realizing that I was arguing with a message that had appeared out of nowhere. I took a few more bites, and the message eventually faded away. Frowning, I grabbed my breakfast and went to the living room and turned on the TV. The network I had been watching the night before came on, with the morning news crew in a frenzy.

“… and reports of strange messages have been coming in all morning. All levels of government are asking the population to calm down as they investigate this strange phenomena.”

I remember letting out a sigh of relief. It was very comforting to know that I wasn’t going insane. I ate my breakfast slower than usual, my attention drawn to the news broadcast. However, when it became clear that no one knew what the hell was going on, other than that the messages were always relating to an activity, I turned the TV off and sighed.

“Might as well go into lab,” I said to myself as I put my dish in the dishwasher. I noticed it was full, so I put in detergent and started it up. Immediately after I pressed the ‘Start’ button, a rectangle appeared in front of the appliance with the word ‘Washing…’ above it. I watched it for a minute and saw that it was slowly starting to fill up. 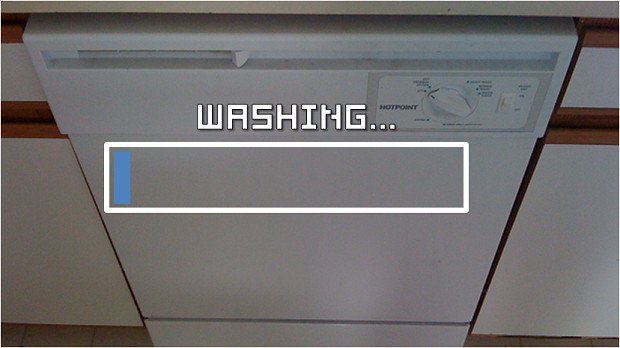 With a shrug, I slipped on my shoes and left my apartment. Like every morning, I rode my bike to commute to the university. As I went through what was, normally, a quiet suburban neighborhood on that warm summer morning, I saw a lot of people trying desperately to hold onto their morning routine. The most common sight was kids laughing and screaming with delight at messages in front of their faces, while their parents looked like they might lose it at any second (and according to more than a few messages, that was very likely the case). I found myself chuckling at the comedic confusion and taking my time to enjoy the weirdness of it all. As a result, it took me a bit longer than usual to reach my lab’s building.

When I finally did pull in and lock my bike to the rack, I was greeted with the following message in front of my face: 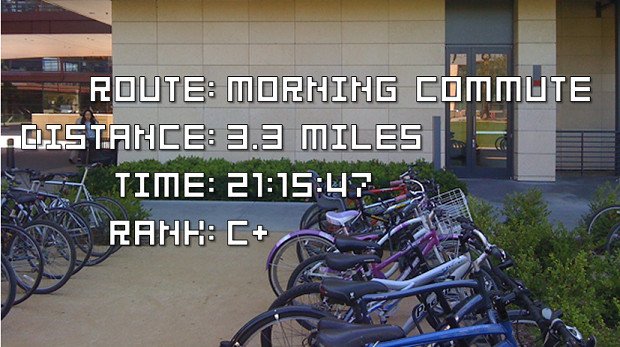 I balked at the rating and frowned. It wasn’t like I was trying for time, and I had enjoyed the ride. The weather had been good, I’d had a few laughs, and I wasn’t on a pressing schedule today. Regardless, my eyes couldn’t help but be drawn to the rating in front of me. Finally, I rolled my eyes and turned away from it.

“Whatever,” I muttered to myself as I walked into my lab to start my day.

By that evening, it was a day I was wishing I hadn’t bothered starting. Throughout it, messages would pop up in front of me giving me information about what I was doing. Some of the information was relevant, some of it not so much. The most benign were the progress bars that would inform me of when an instrument would finish a task, but many of those were pretty redundant. After all, most equipment and computers that you would actually want that information from already come with such displays. By far the most annoying messages were the ones that would come with a rating. When I finally packed up my stuff in the evening to head to the gym, I was beginning to wonder what the basis for things even were.

I remember it was, after a pretty tiring work-out at the gym, when my patience for the messages finally ran out. After I had finished my last exercise and was on my way toward the exit of the weight room, a message popped up in front of my face. 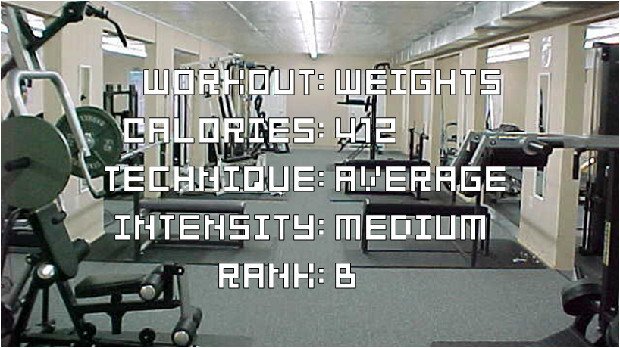 I remember my eyes widening and my blood boiling with frustration. Average technique? Medium intensity!? The fatigue I felt all over my body begged to differ. My hands tightened into fists, my teeth clenched, and I let out a low growl as I tried to contain the irritation that had been building up all day. Finally, and much to my own surprise, I just let it all out.

“What the hell do you want from me!?” I yelled at the white letters hovering in front of me.

“Who are you to decide ‘intensity’ or ‘rating’ anyway? For that matter, who the hell are you!?”

Of course, I didn’t get an answer back. They just hovered there in silence in front of my face. I realized that more than a few other people were now staring at me, which immediately caused my anger to morph into embarrassment. I quickly muttered an apology and high-tailed it out of the gym.

To this day, no one really knows where these message are coming from or what kind of criteria whoever is responsible is using for them. There’s all sorts of theories, ranging from government conspiracies to divine intervention. In the end, I’m not sure it really matters. I, like some others, just try to ignore them. It’s not easy, but I find that it makes life more enjoyable. Of course, there are other ways people deal with them. Some obsess about them, trying to constantly get perfect ratings. Those types believe that this is some sort of affirmation that they’re ‘living correctly’ or that they’re better than the rest of us. On the flip side, there are the people who purposely try to get the worst ratings possible. They’re trying to buck or subvert ‘the system’ (whatever the system for these things is), and outwardly reject the notion that anyone or anything can evaluate them. They haven’t realized that constantly trying to get a bad rating makes them just as obsessed.

But as I said, I just try to ignore them. I remember enjoying life more before the messages came. I was ignorant of my performance and was living life to live it, and taking joy in the small things. The things I cared about weren’t necessarily the things the messages, or even other people, cared about it. I was ignorant of all the metrics, parameters, and evaluations, and it was, well, bliss.

Though I will admit the progress bar on the dish washer is pretty nice. 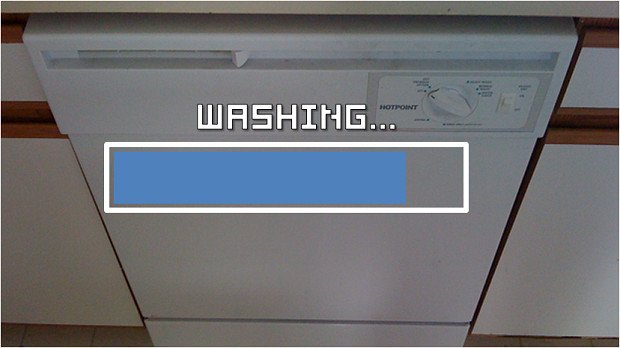