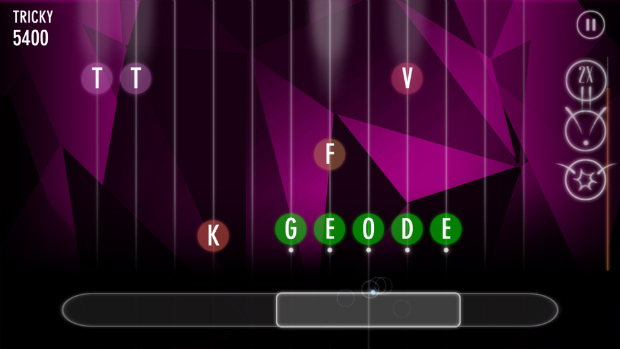 Made by Teddy Diefenbach of Hyper Light Drifter fame

You know Teddy Diefenbach, right? He is one of the people working on the Kickstarter uber-success Hyper Light Drifter, and he just cannot seem to stop making new games. At E3 we got to play a bit of his newer title Kyoto Wild, and in one week his studio Rad Dragon will release Alphabeats, which is billed as “Scrabble meets Dance Dance Revolution.”

Watching the gameplay above, it looks like the rhythm aspect is not a huge part of the gameplay, as players maneuver a group of letters at the bottom to catch more letters and build valid words. That said, the trailer features my favorite BigGiantCircles song (“Katana Blaster”), so I was drawn in regardless.

There are some neat features, like a word of the day functionality and the ability to look up definitions of words, both put in place to help improve vocabulary. Because who doesn’t associate dubstep with eloquence?

A bummer for me comes at the end of the trailer, however. Alphabeats is set to release on iOS on July 10. There is no word of a possible Android release.