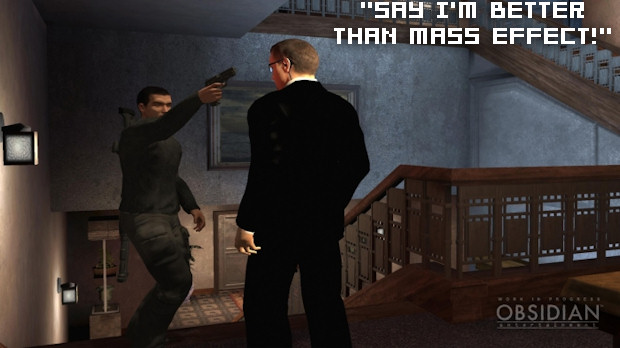 If retailer listings have it right, Obsidian’s espionage RPG Alpha Protocol won’t be coming out of development until this summer — June, specifically. That’s a mighty delay for an often-overlooked game set to hit this October. But the release postponement is all for the good of the product, right?

It is according to Obsidian’s Mathrew Rorie. In a recent message board post (via VG247), Rorie said this most recent delay would help the game become more visible, and give Obsidian the time to shine it up and make it look even prettier.

“Just keep in mind that, in the end, this is going to help Alpha Protocol achieve the greatest success possible for it,” said Rorie. “The game is going to get a good coat of polish to it, and it’s also hopefully going to become more visible to the gaming community at large. So that’s a win-win for everyone. It sucks that it won’t be coming out for a while, but it’ll be awesome when it does,” he said.

Rorie’s message was also to relax those unprepared for the delay, obviously bothered that they weren’t playing the game in the month they were prepared to.Nestled among the treasure trove of information in the leaked Sega document, there was an unfavorable mention of Obsidian’s Alpha Protocol, leading us to believe that Sega wasn’t happy with Alpha Protocol internally. Lines like, “not enough like Mass Effect,” and “barely RPG,” are quite damning, despite Obsidian’s rebuttals.

Speculation aside, the one sure thing in all of this is that Alpha Protocol was an invisible videogame, its voice drowned out by the dozens of blockbuster titles like Uncharted 2, Brutal Legend, Call of Duty: Modern Warfare 2 and the like.

So, will this delay help make the game visible? Sure, provided that Sega puts some financial muscle behind the marketing and takes it outside of the Internet. This is a wait and see kind of thing, but we’ll definitely be looking. How about you?