When more erudite wordsmiths than myself approach what makes videogames unique as an entertainment medium, the concept of interactivity is the one that comes up the most often. The fact that a gamer can manipulate and alter the experience through their own volition is the distingushing mark of a videogame in this argument.

This is the concept that puts the control into “controller”; what’s strange, however, is that this well-reasoned theory seems to run directly in opposition to conventional wisdom.

Uncharted 2 was arguably the most cinematic experience in gaming history, and still managed to be as videogame-y as a videogame can be. It garnered GOTY honors from Destructoid and many other sites, despite its emphasis on driving a linear story and level progression rather than allowing the player to directly impact the experience beyond a series of binary (pass/fail) inputs.

So, if great success can be achieved with almost antithetical design philosophies, theorizing that the greater truth lies somewhere between the extremes of pure narrative and pure interactivity would be a reasonable assumption to make, no? I think we’ve been looking to the wrong art form for inspiration and comparison.

Theatre, not film, is the medium that strikes the most profitable compromise between interactivity and narrative. Instead of trying to connect the dots to Kane & Lynch from Citizen Kane, we stand much more to gain from exploring the link between The Bard and The Bard’s Tale.

Probably the most striking similarity between theatre and gaming is that both have a propensity for breaking the fourth wall. No matter what, there’s always a part of us that’s keenly aware that we’re watching a play or playing a game.

Sometimes this breaking of the fourth wall is intentional; Iago in Othello speaking directly to the audience about his manipulation of Roderigo (“thus do I make my fool my purse”) has the same effect as Psycho Mantis moving the controller with his mind in MGS. Even the excellent iPhone RPG Zenonia had some humorously self-referential moments where in response to a question, a villager would respond with “What do I know? I’m only a NPC.”

Theatre, due to its nature as a live performance, has an element of unpredictability to it. The same show with the same actors will still be different every night. An audience member’s cell phone might go off, a technical cue might be missed, or an actor might forget or alter a line, forcing a scene to take an unexpected tangent to get back to the scripted dialogue. All of these things remind us that we are audience members.

As a gamer, glitches and bugs, or technical issues like clipping or rough animations provide a similar effect. We never know when a game’s programming will result in something that the developer never intended.

Often times, players (like actors) can circumvent the script entirely, using loopholes or game mechanics in ways that weren’t foreseen or accounted for to grief, profit personally, or to create a whole other game within the game. The very existence of emergent gameplay like this takes games away from the cinematic realm and pulls the participant back into the awareness of being a player. 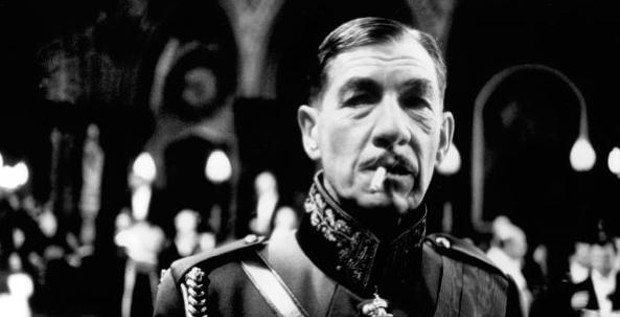 Richard III on digital distribution: “Now is the winter of our disc content.”

Another major similarity between theatre and games is the use of conventions to convey certain concepts. Conventions are rules which only apply in a particular world or situation. For example, in a movie, blood or damage has close to a one-to-one ratio of representation; meaning that if a person is hurt, we can see the “actual” wound, pooled blood, etc. on the screen.

In a play, however, a convention is often used as a surrogate for realistic representation. An actor might pull a bright red scarf from the location of a wound to indicate that they were stabbed and bleeding; the audience sees the abstract imagery and recognizes it as blood. The audience is intuitively clued into the meaning of the convention through context; the actor emits a yelp of pain, and so we interpret the scarf appropriately.

In games, there are many conventions for damage or blood. The life bar and numerical HP totals are classic examples, while a player’s screen slowly hazing from color to black as damage accumulates is a more recent tradition. The advantage of this means of relaying a concept is that it promotes abstract thought and stimulates the imagination.

For me, it’s this stimulation of the imagination that simultaneously provides the most powerful similarity between theatre and games and excites me about both. In order for a play to achieve its goal of entertainment, education, inspiration, etc., it is 100% necessary for the audience to participate in the process. This is where the element of interactivity comes in.

An audience can participate in a play on two levels. There are rare instances, such as dinner theatre, where the audience directly chooses who the murderer is and the troupe performs the corresponding script. On this level, the involvement is both conscious and active.

The most common level, however, is the unspoken contract that an audience enters into when attending a play. This more passive and implied form of interactivity is referred to as suspension of disbelief. It requires an audience to relax analytical thought enough that the imagination can be applied to assist the play or the players.

When Peter Pan gets hoisted up on wires, the audience is forced to exercise their suspension of disbelief. The observer’s imagination, bolstered by the conventions that the play exercises to indicate flight, allows the observer to experience Peter Pan as flying. Without suspension of disbelief you’re just the tool in the back saying, “Lame, I can totally see the wires, durr hurr.”, when you could be enjoying yourself, transported by the show.

Gaming is no different. We must actively engage our imagination to fill in the blanks between pushing an analog stick forward and a person walking. Suspension of disbelief is what allows us to experience the emotional impact of the courtroom scene from Chrono Trigger. Without it, you’re just that tool in the back saying, “Lame, I can totally see the pixels, durr hurr.”, when you could be having a grand adventure.

Shall I compare thee to a bloody mess?

When I look at the success of cinematically driven games such as Uncharted 2 or MGS4, and compare it to the equally valued interactivity of games in the vein of Sleep is Death or what Molyneux has attempted to achieve with the Fable series, neither extreme strikes me as wholly representative of what videogames can accomplish. The similarities with theatre provide the basis for what we truly enjoy about gaming.

We can shoot people, but because the fourth wall is broken we can remove ourselves from the guilt of that experience and simply bask in the adrenaline. We can participate in a journey of epic scale, because we can harness our powers of abstract thought to bridge the narrative gap inherent in the convention of fast travel points on a map. We can engage in dialogue with an artificial construct, because we can harness the creative powers of our mind to add layers of nuance and motivation to the dialogue that the developer has provided.

When we consistently remove the need to exercise our imagination, as often happens in wholly cinematic experiences where everything is spoon-fed to the audience, we run the risk of seeing experiences that require us to do so as less valuable. Instead of suspending our disbelief, we begin to overly criticize the lack of realism in abstract gaming conventions, which results in only one thing: the slow and excruciatingly painful extraction of all the fun from what should, by nature, be a joyous and magical experience.

Let’s not do that. Let’s focus on what makes games truly unique and worth engaging in, and not try so hard to tear things apart. Old William probably said it best, back in the day — “The play’s the thing.”