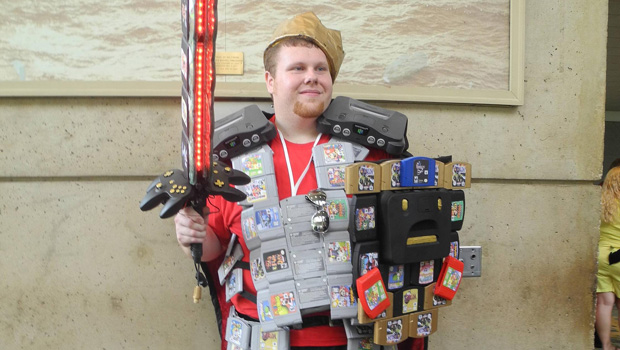 No, that is not a Photoshop. That is King Nintendo 64. Hail to the king, baby!

During Otakon this past weekend, quite a number of attendees decided to cosplay, not as a particular anime or videogame character, but rather as a symbol of Internet culture. We’ve got a female Deadmau5, Old Spice Guy, and Nyan Cat, among others.

Then there’s Gary from Philadelphia, who felt inspired to fashion an ass-load of spare N64 consoles, controllers, and cartridges into a sword, shield, and armor combo. After a month of assembly, King Nintendo 64 was born. Now, I can appreciate the creativity, but did he have to waste so many Majora’s Mask cartridges? I hope they are still functional, jerk!

Memes in meatspace: Costumes inspired by the Internet [Daily Dot]