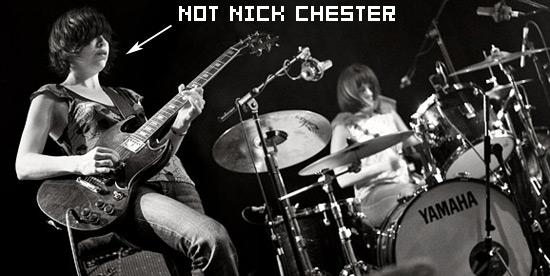 Sleater-Kinney is sort of an institution in my part of the world. See, they began in this tiny Northwest microculture and since then have gone on to the sort of bizarre limbo of indie groups where they’re simultaneously unknown and widely beloved. Like The Decemberists, The Exploding Hearts or everything Courtney Taylor-Taylor has ever done, this region exists perennially on the sharp bit of the cutting edge by knowing the hip unknown first and best and fighting fiercely to keep things permanently that way. That’s why when I see something like Sleater-Kinney bassist down-tuned guitarist Carrie Brownstein reviewing Rock Band for Slate, I’m immediately giddy (and vaguely wary that she’s encroaching on my damn territory).

Putting aside the e-mail I have to write in a few moments threatening her pets and family if she continues writing about video games, her review is phenomenal. Sure, Nick’s cool and all but what was he up to when I was 15? I can almost guarantee he wasn’t melting faces in one of the pre-eminent female rock groups of the least quarter-century. In fact — and I may be wrong here — I don’t think Nick has ever been a woman, let alone a successful female musician whose name you could drop to impress cute indie girls with thick glasses in the alley outside of the now-defunct Satyricon.

In short, go read that review. Also, while you’re there, try not to sound as idiotic as the people in the comments in case you decide to open your virtual gob. We’ll take your damn scarf back if you do.

[Sending a box of scarves to Analog Pidgin for the tip]