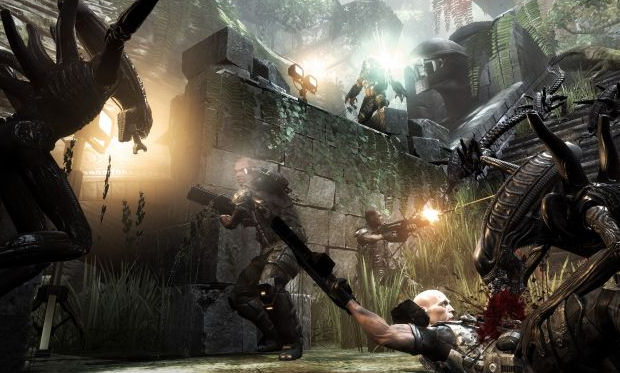 Some may claim that the Aliens and Predator franchises are dead, but the apparent success of the Aliens vs. Predator demo seems to indicate that there are a lot of fans left in the world. According to Rebellion, AvP has been downloaded 14,000 times on Xbox Live alone, which is pretty decent, considering it’s not had a lot of major coverage.

I’m legitimately surprised by this, however. I’ve barely been able to find a match on the 360, and when I have, it’s usually some bullsh*t like a one-on-one round. The PC has a lot of healthy, full matches going, but I figured nobody was playing the 360 version at all. Still, those that are playing it seem to like it. Rebellion proudly notes that the game has a Live approval rating of 4.5/5 right now, and I know all about 4.5s!

In any case, AvP is out this month, and the first review from Game Informer gave it a 5.75. I expect quite a few reviews will treat the game poorly, while a small handful will “get” what the game is really about and love it. From my demo experience, I appear be among the brave and the few. We’ll get our review out there as soon as we get the game and can enjoy all the multiplayer modes.