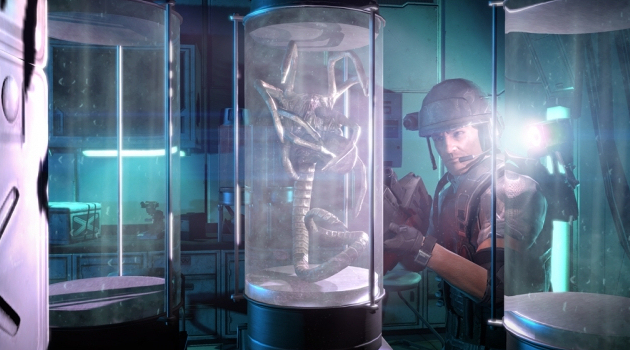 When presenting Aliens: Colonial Marines to a room full of writers, one thing Gearbox CEO Randy Pitchford wanted to boast about was a technique he called “deferred rendering.” According to Gearbox’s most charming mouth, this is the “next generation” of lighting that developers will be bigging up in the next few years.

“We have this guy, we call him The Zoner, Sean Cavanagh,” Pitchford told me in a following interview. “He said, ‘Dude, because of the nature of this franchise, I can rationalize the effort, time, money, and some pretty fucking hardcore brains, to build this engine now. He’s never been wrong. He built the original tools for Half-Life that did all the baked-in lighting. That was all compiled with Zoner’s tools. Everyone’s going to do [this lighting], he wanted to do it now, and see if he could do it on these existing platforms.

“It’s pretty cool. You want the most realistic lighting possible, but machines are slow and only have so much computational power, so what you do is you bake the lighting in advance. The way Gears of War looks so amazing is that most of the lighting is rendered ahead of time. It’s baked onto the surfaces, which is awesome if the lighting stays in the same places and nothing moves, but when the light or something in the environment changes, it breaks it.”

According to Pitchford, deferred rendering makes lighting more flexible, delivering the same kind of atmosphere as Gears of War in a way that isn’t pre-packaged.

“The next generation wants to get over that trade-off by doing the lighting simulation last after all the physical objects are in place. Not only do you need to add the lighting last, it needs to be a better lighting than it was when we pre-baked it. Zoner found a way of doing it. On Xbox 360 and PS3, we get about 90% of the way there. It obviously looks a lot better when you’re playing it on PC, but it turns out the consoles are powerful enough, and all the software’s optimal enough because we’re so late in the life cycle, to where he found a way and we’re fucking doing it.

“It’s pretty exciting for us. When you hear some of the big guys talk about their next generation lighting, you’re going to hear about deferred rendering a lot. It’s very possible that Aliens: Colonial Marines is the first commercial product to ship with deferred lighting.”

I can’t say I know much about the technical side of things. I know real-time lighting itself is nothing new, but I do know that, regardless of how “next-gen” the tech actually is, the lighting in Colonial Marines does look bloody fantastic. I’d say that’s a score for this deferred rendering malarky, be it a marketing term or not.