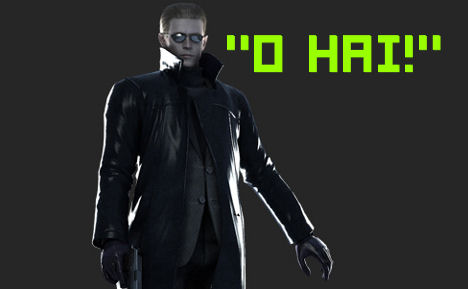 A while ago, I ran a story on Richard Waugh, the man who became known as the definitive voice of Resident Evil‘s Albert Wesker. The voice actor spoke of how Capcom replaced him with D.C. Douglas, a non-union actor, for Umbrella Chronicles and Resident Evil 5. Well, Mr. Douglas actually got in contact with me to clear the air and clarify a few details.

I saw your article about Richard Waugh (which I enjoyed… David Bowie???) and just wanted to clarify a couple of things:

I can’t say anything about RE5 – plot, characters, etc.  I just noticed that there were fans who liked my performance a lot, and fans that wanted Richard back.  Here is what I can say:

RE5 is going through SAG to hire me.  I am union and have an extensive union career (see https://www.imdb.com/name/nm0235006 or www.dcdouglas.net)

So there you go. Douglas is no scab, and is fully unionized. Sadly, even after we tracked Douglas down and beat him up, he still wouldn’t tell us anything big about Resident Evil 5, but he did at least talk a little bit about how he came up with the (totally David Bowie) voice for Albert Wesker (along with a promise of something “very cool” in Resi 5), and you can see that discussion after the jump.

Albert Wesker is an amalgamation of several actors over the years, as well as what the different producers and directors have wanted. Richard started the character, but others have added to it. When I auditioned for the role, they played a sound bite from Peter Jessop’s performance. But in the session, they played Richard Waugh sound bites. Obviously I have my own sound as well. And the director and current producers have a particular sound in their minds, also! So, I have to juggle ALL those balls to give the performance you hear.  And this newest RE installment has additional requirements that were quite a challenge and alter the voice some – but I’m not at liberty to say what they are… Just that it’s VERY cool.

So, please know that I respect Richard Waugh’s work.  The role wasn’t stolen from him.  It was merely the result of Capcom moving post production to Los Angeles (Waugh is in Canada).  I also respect Peter Jessop immensely.  We have the same agent and I see him occasionally.  He was quite gracious.