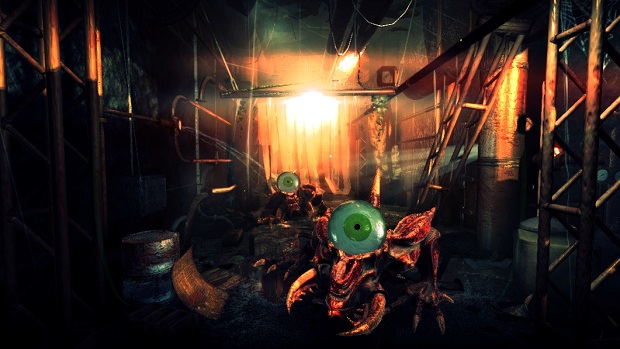 Albedo: Eyes from Outer Space looks like something you’d get if you spliced together The Residents, BioShock and Myst, and it definitely stands out from the crowd. Developed by Z4GO and Ivan Venturi Productions, it is described as an “adventure-first-person-shooter-escape-game.”

Albedo’s Steam page doesn’t do a great job of detailing what the game is really all about, but from what I gather you’ll play as John T. Longy, a night-watchman working at a secret base in a partially abandoned research facility.

Following an explosion, you wake in a tentacle-filled basement inhabited by strange one-eyed creatures. You’ll be tasked to fight for your survival, explore the JUPITER base, and unravel the mysteries that lie ahead as you close in on the secret behind the appearance of these mysterious beings.

If I had only read the description, I don’t think that I would be that interested; it sounds somewhat generic and a bit hokey. However, after watching the trailer I’ve already made up my mind that I will be picking this one up at launch. It’s just too delightfully weird to ignore.