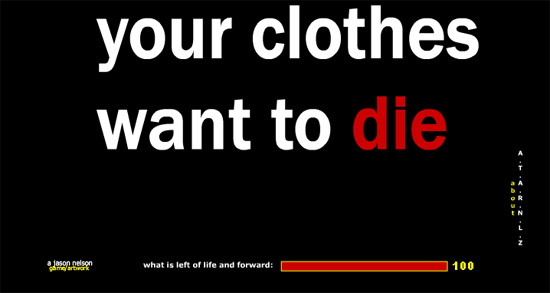 Jason Nelson is the manic, over-caffeinated Salvador Dali of gaming.

If the games-as-art debate has been missing one crucial element it’s the surreal: that area where the human mind frays a bit, midgets are all backmasked and tiny Japanese girls cry blood from eyes the size of saucers. Nelson’s previous work was an excellent example of the sharpest point on the knife labeled “pop surrealism” — after all, what’s more “pop” than the Web-2.0-slathered world of browser gaming? — but it lacked a certain focus. While his newest piece Alarmingly These Are Not Lovesick Zombies never manages to attain anything more coherent than the buzzing energy of a honeybee on meth, it seems to show a maturation of the artist, or at least a greater understanding of his subject.

Then again, trying to attribute a subject or goal to this piece is like trying to piss on a ferret: you’re going to miss more often than you hit the thing, and you’re probably going to end up covered in your own urine in the process.

What does this teach us children? Absolutely nothing, but that alone should be proof enough that this thing deserves a place at Roq La Rue, and a stodgy thirty-something with a goatee eyeing it like its the naïve Thai girl he has locked up in his basement.