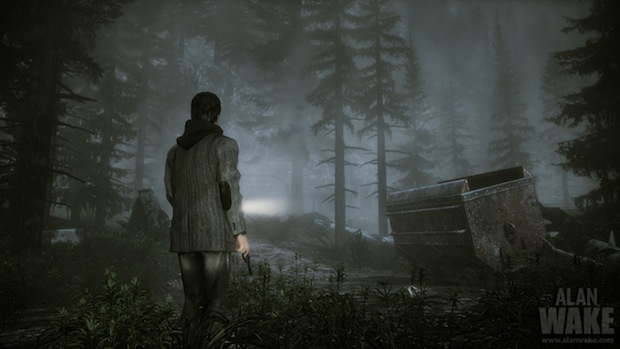 The audio work in Alan Wake is fantastic. It’s probably one of the best aspects of the game. If you set up a good surround system it sounds like you’re actually lost in a real forest. It sounds that way because that’s where they actually recorded the game’s audio. Audio team member Peter Comley had that honor, though he sounds kind of creeped out about it, even now.

Comley, an avid hiker and nature recordist, lives in Washington, where you can find many of the actual locales the game is based on. This crazy guy took his gear and got out into the deep, dark forests at night, alone!

“Some of the recording was done very late at night in environments very similar to the ones Alan Wake tromps through, far in the woodsy backcountry,” explained Comley in an interview with the Alan Wake sound team. “I had to keep reminding myself that there were no such things as ‘the Taken’ when I heard the sound of elk crackling through the underbrush in the moonlit darkness (or even worse, total darkness).”

He continues: “Making this game scared the daylights out of me more than once since I feel like I live where it takes place.”

The entire interview with the sound team is a great read, and is highly recommended for anyone that enjoyed Alan Wake. It sounds like the team had a blast creating the audio for this game. I’d love to be able to work on a team like this one day.