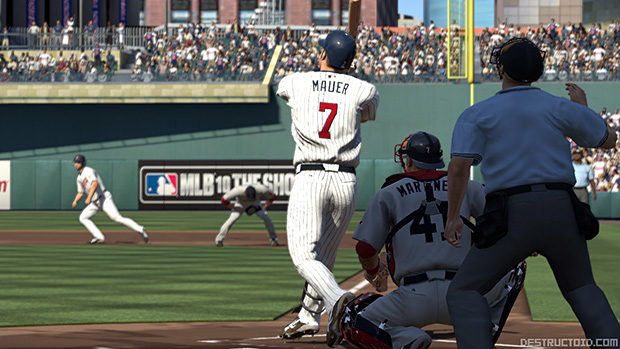 Sony’s finally taking the MLB The Show cover out of the Northeast. Joe Mauer, the 2009 American League Most Valuable Player, will grace the cover of MLB 10 The Show, the next iteration in Sony San Diego’s acclaimed baseball series. The last four cover athletes were Dustin Pedroia, Ryan Howard, David Wright, and David Ortiz, so I’m sure the rest of the nation will be happy to see a small-market team like the Minnesota Twins get some love.

Mauer is a hitting machine who has put up gaudy numbers throughout his six years in the league. He led baseball with an absurdly high .365 batting average this year, winning his third batting title in four years. He was a near-unanimous MVP winner, receiving 27 of 28 first-place votes; he’s only the second catcher to win the award in 33 years. Oh, and he racked up a slew of additional honors in 2009, winning Gold Glove and Silver Slugger awards and getting selected to his third All-Star team. Next year, Mauer will look to lead the Twins back to the playoffs in their brand-new ballpark, Target Field (look above for a screenshot of Mauer going yard in the Twins’ new digs).

MLB 10 The Show will be out in March 2010 on the PS3, PS2, and PSP. For all the details on what it will bring to the table, along with five more screenshots, be sure to check out my full preview.