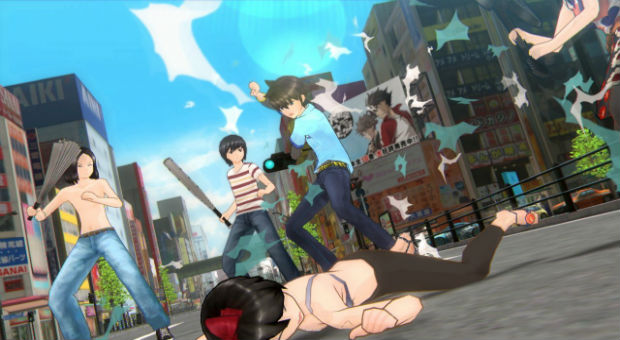 Also, ‘strip portraits’ for male characters as well as the women!

Infiltrate virtual Akihabara in Akiba’s Trip: Undead & Undressed, an upcoming brawler that XSEED Games has gone to great lengths to localize properly. XSEED announced today that beat-the-pants-off-of-your-enemy Akihabara simulation Akiba’s Trip will feature dual audio tracks in English and Japanese. And yet, I’m sure people will still feel the need to come to blows over whether the sub or the dub is better.

Additionally, a special feature added specifically for the North American release will include “strip portraits” of the important male characters to be collected alongside the female portraits already in-game, “providing equivalent gender balance.” Interesting. You can pop these babies into your in-game smartphone to be used as wallpaper. You couldn’t do that with Lunar 2’s bromides. But then, there wasn’t a cell phone in either Lunar, duh, Brittany.

Akiba’s Trip is being released this summer for PS3 and PS Vita, and it looks sufficiently Japanese for my tastes. Will you be picking it up, now that it’s rocking both English and Japanese audio tracks?