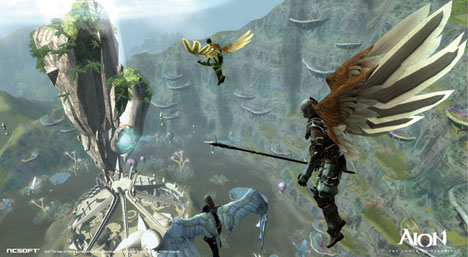 Another MMO, you say? Gosh, break out the party hats. Seriously though, I actually give a damn about NCsoft releases, and that probably has a great deal to do with the character creation system (otherwise known as pure crack cocaine for the comic book nerd) in City of Heroes. Apparently not afraid to talk big, NC claims Aion to be “the most visually stunning MMORPG ever made.” That’s lovely, guys, but what makes it different from every other online grind out there?

Aion centers around the concept of flight, not for transport alone but also for battle. They also claim to be introducing PvPvE, a system that claims to combine PvP and PvE play into one seamless game experience. I’m not sure if I think the concept is good or disturbing. Do I want to be unprepared for a legion of seventeen year olds disguised as flying monkeys to loot my sh*t at anytime? I guess it does add that element of reality in there. Anyway, throw in a storyline with an epic war brewing between Divine beings, and you get the idea of what Aion is going for.

Bottom line: I need a reason to play an MMO other than grinding. As beautiful as this game does look, and as much faith as I have in NCsoft, I still am not convinced it’s worth it to play it. It seems to be a new syndrome cropping up in the gamer community –MMO’s aren’t worth the amount of time you pour into them. What would make you want to play an MMO enough to give up real life time to do so?

Filed under... #PvP#Things gamers do