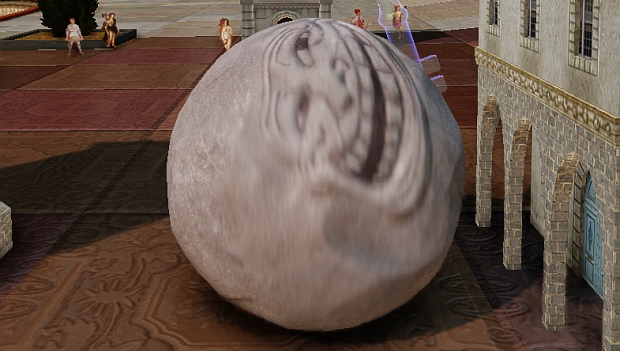 Though ACE Team and Atlus’ boulder-bashing bonanza Rock of Ages is out on Xbox Live right now, but PC players won’t get a chance to smash their hard balls against wood (not in game form at least) until September 7th. This news has made both ACE Team a sad (but still insane-in-a-game-design-way) panda. To stave off that sadness, they’ve decided to include some extras with the PC release.

On release day PC buyers will be get to download Rock of Ages’ official soundtrack along with their purchase. The OST contains remastered, rearranged versions of the in-game music tracks. But the real kicker is that the PC version will also get an exclusive extra boulder skin, one selected after the community asked for it.

And what did the community select? A troll cool face boulder. You read that right. Just see the picture below, it is glorious, and surprisingly appropriate for a game that’s all about smashing up innocent people’s property.