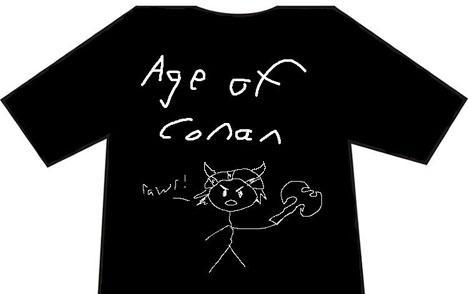 Have you recently found yourself thinking “You know, I sure wish I had a shirt with Age of Conan’s logo plastered on the front” while playing Funcom’s latest MMO? If so, then designer Inno-Wear has you covered. That is, they will have you (literally) covered when their new clothing line releases later this summer.

While there aren’t any specifics about the upcoming outfits, a quick look at Inno-Wear’s Web site shows that their products range from regular graphic t-shirts to “high quality urban streetwear.”

Inno-Wear lays claim to the clothing licenses of over fifty games (such as Tomb Raider, Resident Evil, and Gears of War) but only in Europe, meaning those of us not living in the Old Country might just have to go without. (In their absence I will be selling my own line of clothing similar to that picture above. Accepting pre-orders now.)

Do you enjoy wearing clothing that features characters or artwork from your favorite games? I’m okay with it, so long as they look nice and aren’t ridiculously expensive.

[Zurich, 11 June 2008] The specialist in textile products under videogame licenses has acquired the license of the most popular MMORPG of the moment: Age of Conan, Hyborian Adventures.

The impressive launch of the game recently brought it to the spotlight, and the enthusiastic reviews it has received further strengthens its already large community. With these derived products, the game continues its conquest of Gamers.

Acquired by Inno-Wear for the entirety of Europe, Age of Conan comes to enrich its impressive catalogue of over 50 licenses from the world of videogame.

Products in development will be available by the end of summer, around the Best Price and Himmersion ranges, and will benefit from the official marketing support of the publisher.