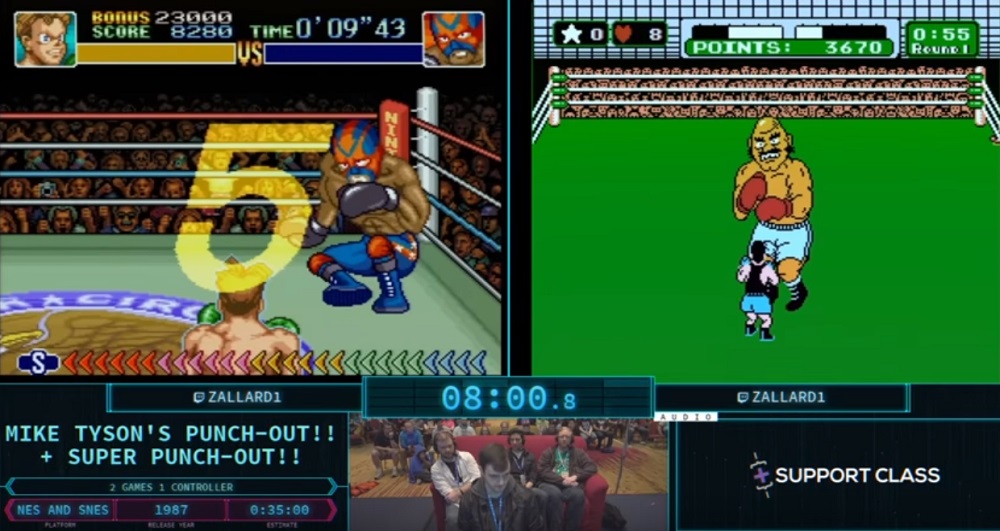 There were many amazing runs on last week’s Awesome Games Done Quick charity event, including a wild dash through Resident Evil 7 and the always-impressive Super Monkey Ball run. But for many, the highlight was Zallard1’s dual-ruining of Nintendo classics Mike Tyson’s Punch-Out!! and its SNES sequel, Super Punch-Out!!

With a splitted SNES controller attached to both consoles, Zallard1 used amazing timing, smart use of the Start button, and time allowed by cutscenes to essentially play, and defeat, both boxing titles simultaneously. This not only required some frame-perfect pausing and strike-buffering, but also the ability to shift fight patterns on the fly (as the Punch-Out!! titles are basically pattern-memorisation games).

I was impressed enough at how Zallard1 just breezed through SPO!!, incidentally one of my favourite SNES titles, but to complete both games and micro-manage his offensive and defensive game on the fly was mind-boggling. I don’t think I’ve even beaten Super Macho Man yet! You can check out the crazy two-game fisticuffs below. All of the week’s runs can be found at the AGDQ Reddit page.