When Nintendo first unveiled the Wii U, my mind raced with ideas for games that could be created with the two-screen interface. A lot of the cool stuff that the DS did could be transferred to the big screen. Better yet, titles like those that made use of Game Boy Advance-to-GameCube connectivity could surface in a more accessible format.

In practice, it has taken a while for developers to do really interesting things with the GamePad. A lot of the most lauded titles would work fine without the second screen. Affordable Space Adventures is one of the few Wii U titles that feels like it could not be done on another platform. It plays to the console’s strengths, finally producing the type of experience the Wii U was made for.

Affordable Space Adventures puts players in the role of space tourists, in control of a Small Craft™, a ship woefully underequipped for the perils of interplanetary exploration. It starts with only a flashlight, but gains new components over the course of the game. Early on the fuel-burning engine activates, and the explorers can get moving.

As new systems come into play, they are controlled on the GamePad, referred to in game as the “heads down display” (heh). Some systems are binary; they are either on or off. Most have variable levels of power, from zero (off) to five (max). Success hinges on managing which systems have power at which times. For instance, pushing the thrusters’ power up to the higher levels can allow for a quick escape but will overheat the engine if left for too long.

Further on, the explorers encounter armed drones to circumvent. Though they are dangerous, their sensors are limited. Some detect heat, some detect sound, some detect electrical activity, and the most robust detect a combination of the three. Each ship component produces some amount of each, so the key to getting past the sentries is figuring out which systems are essential and which can be temporarily powered down or shut off.

At this point, Affordable Space Adventures becomes a sort of puzzle game. It starts simple: if a drone senses heat and/or sound but the ship just wants to descend, then the trick is to hover above the danger zone, kill the engines, then restart it after passing safely by. Climbing through a similar situation would require the electric engine, which has a different feel to it in addition to producing different detectable effects.

Later on, things get more complicated. Some drones can sense both heat and electricity, so players have to come up with clever solutions for avoiding detection or destruction. One section had us turning off the decelerator and coasting through a drone’s area of effect. Another had me crank up the antigravity to gain upward momentum, kill the engines, then restore them just in time for my pilot to navigate us to safety.

The game can be controlled by a single person using the GamePad, and it works fine, though it can get a little hectic coordinating the systems management on the touch screen with the piloting on the big screen. Where Affordable Space Adventures really shines is in two- or three-player cooperative mode. 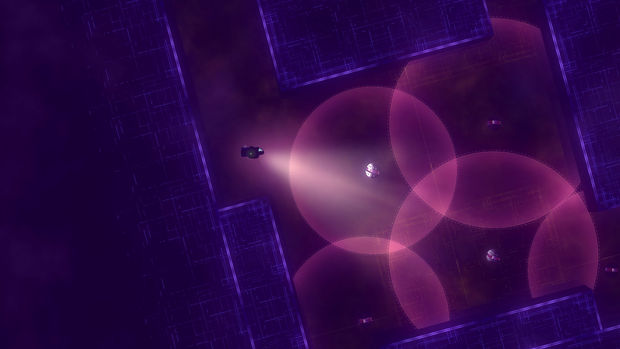 With two players, the one with the GamePad controls the systems and the flashlight while the other controls piloting, scanning, and firing flares. Almost everything players can do is interconnected so communication between teammates is essential. For instance, while the pilot is the one who activates the scanner, the engineer is the one who aims it.

Adding a third player splits the labor further, adding a science officer to the mix. I was only able to play with two during my time, but even that was a great experience. It simulates the action on a spaceship bridge, where each person has specific roles and success comes from coordination and communication between teammates. Other games have done this, but Affordable Space Adventures is probably the most accessible of its ilk, requiring fewer players and just a single console.

As a single-player or a cooperative game, Affordable Space Adventures makes excellent use of the Wii U GamePad. Any who like asymmetric cooperative multiplayer would do well to check it out. When the team works well together it can overcome some tricky circumstances. When the team doesn’t work quite so well and the ship explodes and everybody dies, well, that’s funny too.

Affordable Space Adventures should be available on the Wii U eShop on April 9. The final price has not yet been decided.