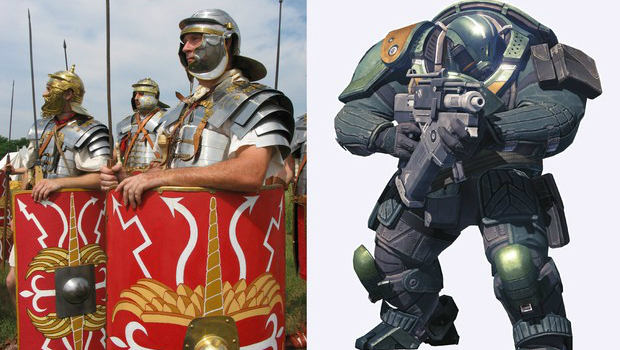 [Dtoid community blogger RedHeadPeak shares another of his adventures of being a gamer-teacher. For more on this topic, be sure to check out his blog! Want to see your own writing appear on the front page? Go write something! –Mr Andy Dixon]

Legionary: a professional soldier in the Roman Army.

Those were the words that appeared on my whiteboard above a picture of a Roman soldier wielding the iconic Gladius and Scutum. But before the lesson could begin, one student pulled an inquisitive face and asked, “Isn’t that what the bad guys are called in Destiny?”

For a moment, several students in the class were distracted. Of course, they were right. In Destiny, Mars is inhabited by the “Cabal”, and the bulk of their forces are named “Legionary”. Regardless, this distraction could have briefly derailed the lesson had I not played the game myself.

Thankfully, I was able to turn this query into the lesson starter.

I asked the student if he could remember the names of any of the other “bad guys.” As they did so, I wrote the words on the board. I then added a sentence next to each one explaining what the word meant. Those key words stayed on the board for the rest of the lesson as a reminder:

Phalanx: a group of soldiers fighting close together

Colossus: a really big statue of the emperor

Despite all the praise we may throw at videogames, they can be very distracting. As a teacher, I will sometimes use videogame references to facilitate learning, but it’s not a tactic I could use all the time. Whether I like it or not, videogames have altered how we use certain words and phrases, and even the most arbitrary use of gaming vocabulary can trigger unwanted thoughts of videogames. Even if you are not a teacher, there are words to avoid using in conversation if you want to keep your audience concentrating.

Below is a list of words that you need to watch out for. This isn’t a warning as such; there’s nothing wrong with using any of these words. It just helps to be aware that when you use these terms when talking to gamer friends or talking to a group with gamers in it, their minds are bound to wander.

You’ll notice that a lot of these words are historic terms. That’s partly because I teach history, but also because historic words and phrases have, for a long time, been reworked into fiction of all kinds. Games are no exception.

To a historian unaffiliated with videogames, the Order of Assassins (originally known as “Hashashins”) were a brutal and radical group which originated in Persia. The ruins of the fortress that their leader once occupied can still be found in Alumut. The fall of the order took place in the mid-1200s. In the minds of young gamers however, the Order of Assassins conjures up a different image.

The Assassin’s Creed games do contain a great number of accurate historic references. Yet for each pinch of accuracy, a dollop of inaccuracy is applied. The original assassins did favor daggers to carry out their sinister task, but I imagine they would have found the retractable weapons entirely ludicrous. The “Leap of Faith” was also practiced by the Hashashins, to prove their devotion. However, the outcome of the real “Leap” is much more gruesome.

Even when you refer to more modern assassins such as Gavrilo Princip — the man who assassinated Franz Ferdinand and sparked World War One — the students will be distracted by the term “assassin”. Make sure you show a picture of the man before using the word, or else the gamers in the class will have already pictured him where the most inconspicuous hood and cloak, walking down the streets of Bosnia, throwing smoke bombs at the faces of passers-by.

You should always use this word as shown above. Never try to save time or simplify things by shortening it.

The term “combo” will have gamers momentarily distracted. I once witnessed another teacher chastise two younger students for being immature in the school corridor. The teacher insisted that they stand apart whilst waiting for their lesson, because the two made a “bad combo”. The comment clearly triggered thoughts of Street Fighter in the two boys, because seconds later they were being told off again for “mock fighting” in the hallway.

Sometimes students accidentally swear. Young minds absorb a great deal from what they see and experience, hence why they make such great learners. Children can be inspired and educated, but they also take on bad habits that they witness. Two years ago I was eemphasizing to a GCSE class that they needed to be critical of source material (is the author reliable? How useful is the information? Etc.). I pointed to several students and asked them to repeat what I’d said, in that corny way game show hosts carry on:

The student was mortified. They cupped their hands around their mouth, trying to push the sound of the word back in, as twenty-nine pairs of eyes turned to stare. Luckily for that student, I am a gamer:

ME: You’ve been playing a lot of Borderlands recently, haven’t you?
STUDENT #3: [ashamed] …y-yes sir.

You see, “critical, biatch” is a stock phrase spouted by one of the main characters of the first Borderlands game (Roland). It’s hardly the snappiest catchphrase, but after hearing the line for the fiftieth time, even I found myself repeating it after scoring a critical hit.

Sometimes older students show new students to their classroom or to the front office. Sometimes a teacher might ask a student to guide an ailing peer to first aid. Just be aware that, when you ask someone to “escort” someone to their destination, they may instead hear “escort mission.” They’ll still do what you asked, and act as guide, but they will take the task way too seriously.

This is a pretty obvious one, when you think about it. This can be a big pitfall for science teachers. The phrase “half life” is ingrained into ever gamers psyche. You might think that you’re having a conversation about the exponential decay of nuclear materials (I can sense science teachers ready to tell me I’ve got that wrong) but in the minds of your students, head crabs and aliens are at the forefront.

And whatever you do, avoid using the phrase three times during a lesson. Some people will go to extraordinary lengths for a “Half Life 3 confirmed” gag.

I wasn’t planning to begin and end this little list with Assassin’s Creed, but here we are. This is another very recent “trigger word” that will have gamer-students mentally drifting.

Whether or not you’re a teacher, I’m sure you remember assemblies or talks from the Head Master/Mistress promoting the well being of students and positive ethos around the school. School is a community, in which you were a valued member. Students and teachers should always work together towards an outstanding environment for learning. There is always strength in unity… unity… that new Assassin’s Creed game looks like fun.

I’ll be honest; I’ve not seen a student distracted by this one. Not yet anyway. No, this time it was me who was recently distracted when this word was used on multiple occasions during a staff meeting. But only briefly, I assure you…

There are lots of other examples; this is just a cross section of words can set a gamer off on a tangent. I’ve no doubt that you can also think of times when someone has used a term or phrase that you linked back to video games. Why not add a comment below!