[Dtoid community blogger Cheffluke is the senior director at Tic Toc Games. He has worked on some pretty awesome stuff and is part of a game coming out called Adventures of Pip. Want to see your own writing appear on the front page? Go write something! –Occams Electric Toothbrush]

Hello reader!  My name is Jeff Luke, a Senior Director at Tic Toc Games!  I got my start in the game industry back in 2005 at a company named 5TH Cell.  I started as a Level Designer on the Drawn to Life series and moved onto being a Game Designer on the Scribblenauts series.

After 5 years at 5TH Cell, I looked to further my career at one my favorite game studios, WayForward. There I was an Assistant Director on Adventure Time: Hey Ice King Why’d You Steal Our Garbage and moved up to being a Director on multiple projects including Regular Show and Shantae and the Pirate’s Curse.

One day I saw a Kickstarter for a game called Adventures of Pip appear.  I was so enthralled by their vision that I felt like I absolutely had to be a part of it.  A few months later, I continued my career at Tic Toc Games as a Senior Director and joined the incredible Adventures of Pip team, with its Director, Marc Gomez, and Sr Producer, Cathy Camacho.

Pip as a Whole

What’s Adventures of Pip you ask?  Well good reader, let me tell you… 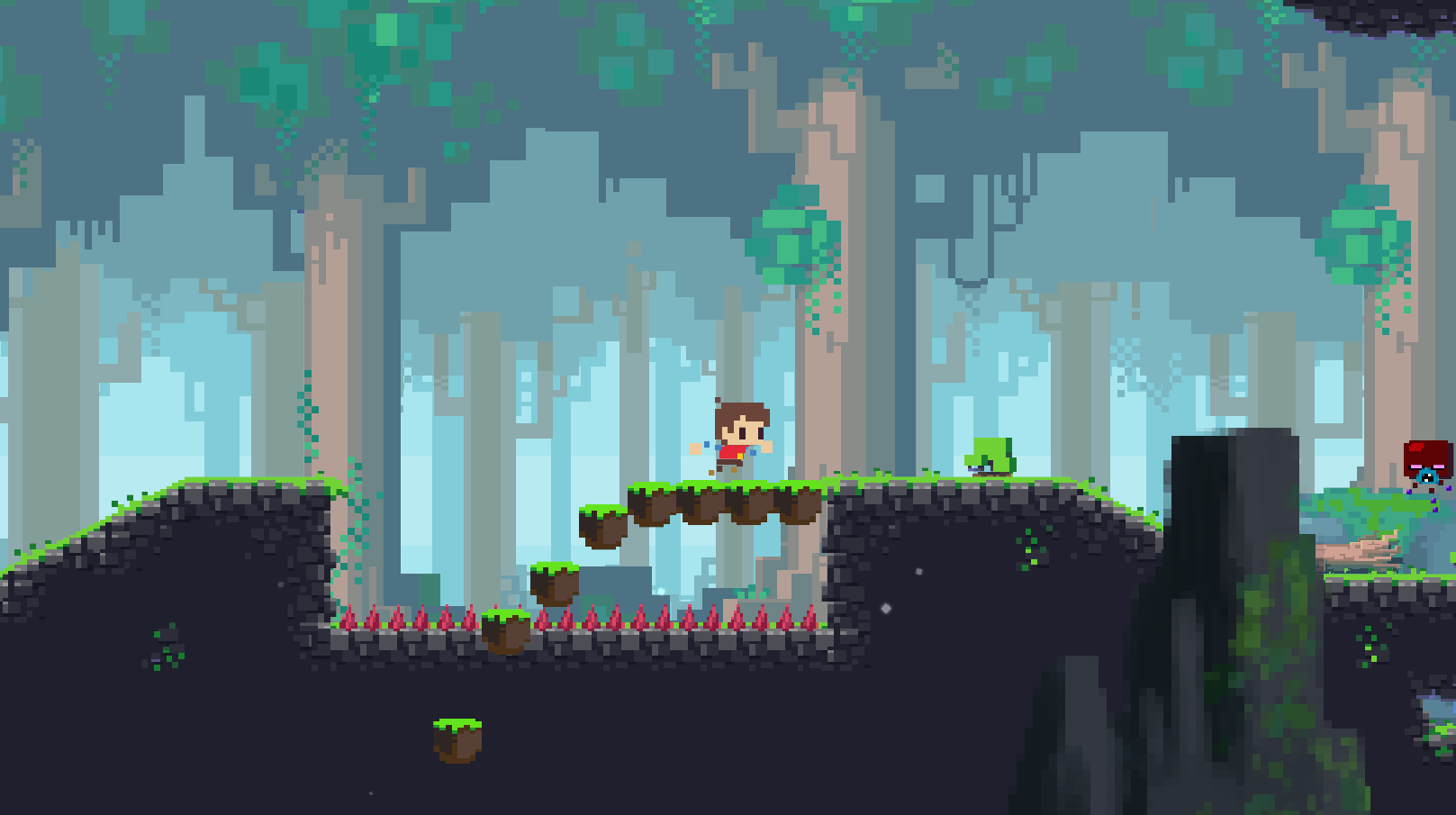 We made Pip as a celebration of the evolution of the platformer.  Each level of his evolution reflects certain moments in gaming history that left a footprint in the annals of video games.

In this article, we will be taking a look at each evolution level and how we chose to reflect this certain moment in history in our own game.

At the beginning of the game, you start as a single pixel with limited abilities.  You can walk, jump, and float for a short period of time.  When we were designing the mobility set for Single Pixel Pip, we looked at the Atari 2600 for reference.  While Atari 2600 had many characters that were more than a single pixel, it was also an era where platforming games were brand new, so we looked at games such as Pitfall, Jungle Hunt, and Smurfs.  These were prime examples of the most basic platforming games of the era.  In Jungle Hunt, for example, you can walk and jump, yet in order to complete the game, you really have to master these controls. In Pitfall, you could also climb ladders in certain situations, and in Smurfs, you also could only walk and jump.  We really wanted to capture the essence of the ‘easy to learn, hard to master’ gameplay of this era.

Speaking of other levels of evolution, let’s discuss 8-Bit Pip. Shortly into the game, you will unlock your 8-Bit abilities. When we were designing the mobility set for 8-bit Pip, we had a lot of choices to reference, but we primarily looked at games on the NES. The big things we wanted to focus on was increased speed and a sense of freedom in the mobility, so we looked at games like Ninja Gaiden and Metroid because both of these games added more freedom to mobility. Ninja Gaiden was a very fast paced game with a wall jump while Metroid allowed you to move freely in all directions and encouraged you to discover secrets in the environment. These were easily two of the most influential games for our 8-bit mobility and arguably two of the most influential games during this era of gaming.

The final form you unlock is 16-bit Pip.  He is more about combat and puzzle solving so his mobility isn’t as fast.  We wanted to look at games from SNES and Genesis that had similar move sets.  Lost Vikings, and Actraiser were some of our top choices as they all had a slower movement speed and focused more on being strategic and solving puzzles.  In Actraiser, in the platforming sections, you control a hero who moves slower and swings a large sword much like our 16-Bit Pip, but 16-Bit Pip can also push blocks to solve platforming puzzles, so we also referenced Lost Vikings with their more puzzle oriented mobility types.  In Lost Vikings you control three different characters where each character supports each other. One character has a shield that both acts as, in fact, a shield, and also as a platform to help the other characters. Our final implementation was kind of a combination of multiple styles, with a slower movement speed, a sword that had multiple uses, and the ability to push and pull blocks to help your other forms get around easier.

With 3 unique mobility types accessible to the player, it really made Pip a unique venture in the platformer world. Other games have had different mobility types but in most cases, they are tied to different characters or specific situations.  What made Adventures of Pip unique is that you could switch between these mobility types at any point (pending you had access to a Bit Beast), which made designing levels for the game a unique challenge in itself.  A player familiar with many platformers for gamings past will notice many familiar elements from different games, but they’ll always need to keep in mind that they have two other mobility types that might help them in the situation coming up.  We really utilized this is some of the more challenging sections of our game where you may need to switch evolutions while in mid-air or while fighting a boss which definitely keeps the player on their toes throughout most of the experience.

Creating a game that not only told the story of an underdog who evolves to become a hero, but also the story of the evolution of the platformer was an incredibly fulfilling experience for the entire team. There were many lessons we learned throughout the development and we all gained a higher respect for our gaming roots.

In the end, we as a team were very proud with the final product and definitely hope to revisit the kingdom of Pixelonia one day!