This year I attended PAX East 2014 as both an exhibitor and a speaker. I was working at a booth for Press XY in the Diversity Lounge, and was also a panelist for the Trans Against Insanity game we played inspired by Cards Against Humanity. More on that later. The goal of this article is to explain my personal experience at the Diversity Lounge, and to attempt to dispel some rumors or negative ideas about the Lounge that are objectively false.

The Diversity Lounge, for those who aren’t already aware, was an attempt by Penny Arcade to show inclusiveness and fairness to all types of people. There were booths there covering trans issues within the gaming industry, gay and lesbian representatives, and much more. The focus definitely seemed to be on the gender, sexual, and romantic minorities (the GSRM) but obviously people of all creeds, nationalities and races and situations were welcome as well. One of the booths, the Able Gamers Foundation, was a particular favorite of mine. Their mission statement? “To work to improve the quality of life of people with disabilities using the power of video games.” It is a great cause and a lovely group and they were a pleasure to talk with. If you have any gamers with disabilities in your life, make sure they know about this team of people. 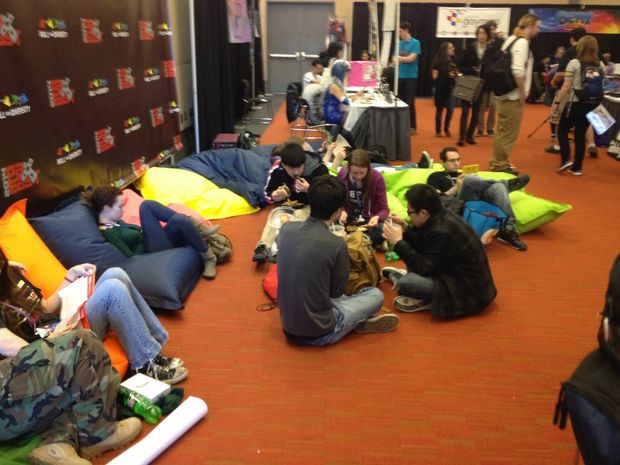 I arrived at PAX entirely free of any preconceptions, as I had never been to PAX before this. I was pleased with the layout of the convention center. The Diversity Lounge was located to the right of the Expo entrance where you get your badges, around the corner of the hall. It was fairly easy for me to find and I didn’t feel like it was out of the way, but I’ve heard reports that some folks had some trouble locating it, which is unfortunate.

I entered the lounge and was given my instructions on how to run the booth, and what things we were giving away to visitors. It was a very rewarding experience. I was there with my boyfriend and we had a lovely time talking to people and helping educate. I speak personally from the trans female perspective, but there were all sorts of other different folks there talking and exchanging ideas. I had a number of cisgender (“Cis” meaning, “On this side of,” commonly used to describe people who identify with the body they were born with. Eg. A male identified person who was born as male physically) men and women come up to me and ask me about my experiences and what it is like being transsexual and facing the things we face. Especially in relation to the games industry. I met a few people that came in uncertain of what to think, and left with a hug or a handshake and a smile. It felt good to be part of the teaching process. I got to watch people grow and learn about something very close to me. It was poetic, in a way. My transition helped them transition. 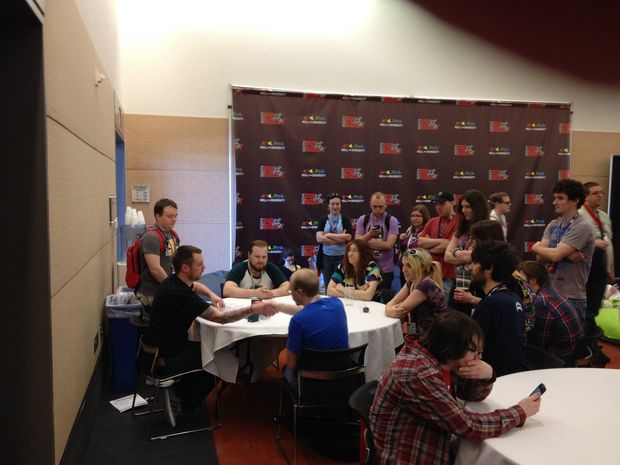 After that I headed up to the Arachnid Theater at 4:30pm to prepare for the Trans Against Insanity Panel. The other panelists and myself had a special set of Trans Against Insanity Cards to hand out to the first 100 people to attend. It went really well. We quickly ran out of cards and the place was almost filled. It was a great turn out. We displayed custom black cards relating to the trans experience on a screen behind us, and gave some funny answers, before moving into a serious space to talk about how certain things affected us.

For example, “The thing I miss the least about being pre-transition was _______” We had some funny ones here, but it also gave us a chance to discuss things that affected us in our lives before we became who we are today. We had more questions from attendees at the end than we had time to answer so I took some questions privately after the panel was over. It was a great time and the response was very positive.

Back at the booth, I had a few people approach me and tell me that they had been struggling with their own gender identity and that the lounge and panel had really helped them. Nothing beats that. Nothing.

Okay, onto the controversy.

There is a lot of fuss on the internet right now about some cropped pictures showing Mike Krahulik, co-founder of PA playing a game with us in the lounge the next day, Saturday the 12th. The photos show what appears to be a number of white men standing around. Many people have pointed to this as an example of the failure of the Lounge but that couldn’t be further from the case. You have to remember that many of those people could have been part of the GSRM. We have no way of being able to tell from an edited photo. 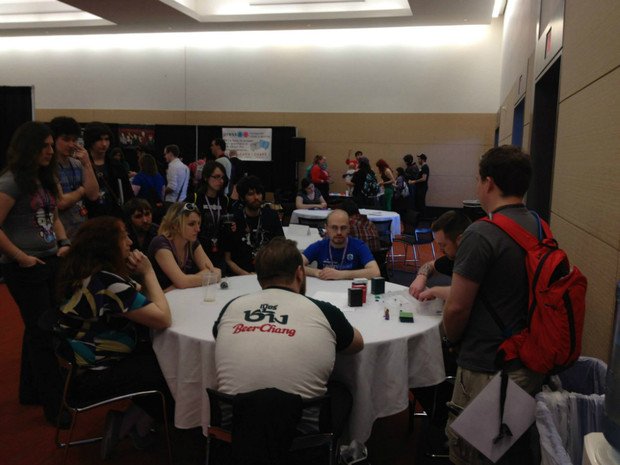 I am the blonde girl on the left of the table with the glasses. The game we played was, “Thornwatch.” I will be doing a separate write up on that game soon.

I’ve also noticed many statements expressing that Mike wasn’t welcome in the Lounge; that he came there without our blessing. That too was not correct. Here is my take on it.

Mike has said some very inflammatory things, and should be held accountable for those, but we as a community have to show that we have the capacity to forgive a man who has done so much good for the world. Having met him now, I found him pleasant and personable. He didn’t misgender anyone, and we had a great time talking with him. Actions speak louder than words, and if Saturday was any indication, he is trying to reach out in whatever small way he can. I’m not saying it clears him of responsibility for his statements, but it is a start, and of all the things to hound on him about, I don’t think that this should be one of them. His appearance and the play-test should be seen as a step in the right direction. After the play-test he stuck around for about 15 minutes and talked with people about the game. He was genuinely excited about it, and my compliments made him smile such a real, infectious smile. It felt good. He is just an old geek like all of us. Awkward and uncertain in so many respects. The experience allowed for me to give him another chance, and for him to meet some trans identified people in the real world.

There is my point. Diversity is for everyone. Straight, gay, lesbian, trans*, cis, black, white, Asian, asexual, etc. All people are included. The diversity lounge acted as a safe space for many people. If a person identifying under the GSRM in particular felt afraid or had a bad interaction, or just got overwhelmed by the shoulder to shoulder intensity of the Expo Floor, they could come to the Lounge and find people that understood. The enforcers were friendly and knowledgeable, and the booths and people there were waiting with hugs and smiles for anybody that needed one.

The goal was to be inclusive to everyone. Next year if it happens again, you should stop by and say hello.