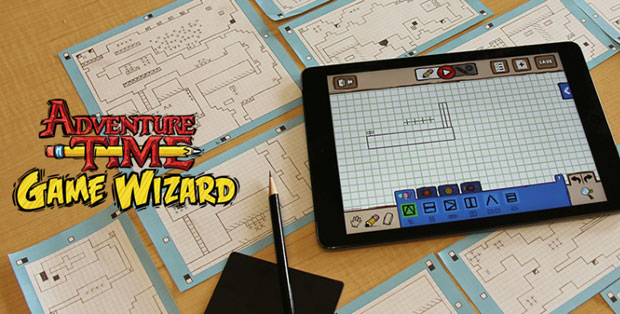 There’s a new game coming out based on everybody’s favorite television show, Adventure Time! You know what that means right? Go on and grab your friends, because we’re going to some very distant la—actually, you might want to rethink going on this adventure.

Adventure Time Game Wizard‘s biggest strength is in its content creator. Using the iPad camera, you can scan in any level you’ve drawn out on a piece of graph paper, or you can draw directly in-game. From there, you can choose a themed backdrop based on the show including the Snow Kingdom, Candy Kingdom, and others.

There’s a set of simple shapes and outlines you can draw, each corresponding to a type of platform. Want a lava pit? Just make two vertical shafts with zig zags in between. Need a moving platform? Just sketch out a striped rectangle.

There are a good number of platform types you can draw and combine to create your own levels, and Game Wizard offers an intuitive guide for all the shapes you can use. They never get more complicated than what you can trace on graph paper, and even when I didn’t draw perfect lines, the scanner was always capable of translating past those errors.

So the level editor sound cool, huh? Unfortunately, the rest of the game drops the ball.

Simple commands, like switching directions, felt needlessly janky. Didn’t matter whether I slid my finger over the d-pad or tapped it — there was a noticeable pause in the time between hitting a new directional button, making the experience frustrating when going through the story mode. You can just imagine how unforgiving it can feel when playing on amateur fan-made levels.

I like Adventure Time and would really dig a good game based off the show, so it hurts that this handles the way it does. Despite the rather ingenious level editor, Game Wizard is just par for the course for licensed games.