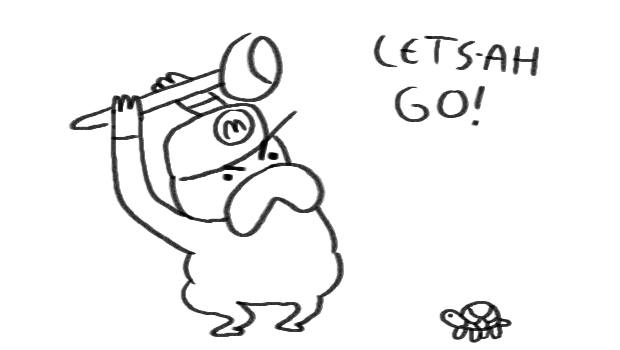 What’s really interesting to me here is that Ward’s first blog entry, which states “My name is Pendleton Ward. I want to interview people who work on games.” From there, every entry is about trying to get a hold of someone who worked on a Mario game, including Charles Martinet (a guy I annoyed last year). Ironically, I’ve been trying to get Ward on my show interview show to talk about the game he’s making with WayForward (Adventure Time: Hey Ice King! Why’d You Steal Our Garbage?) for months now, but I haven’t been able to track him down. Hearing that he wants to talk about games at all gives me renewed hope that he may end up on Sup, Holmes? someday.

Mr. Ward, if you’re reading this, feel free to talk to me any time you like on Sup, Holmes? about making games. Come to think of it, you can just have Sup, Holmes? if you want it. Just today, Anna Anthropy and I had a great time on the show talking about the pros and cons of Princess Cookie, one of the many inspiring characters from your show. The only way it could have been better is if you were there too. Maybe next time? Sup, Ward?

Feel free to bring Kid President with you!