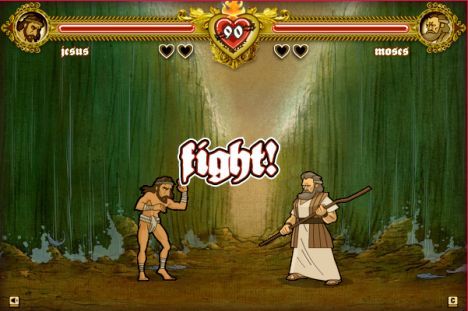 It’s not exactly Capoeira Fighter or anything, but Adult Swim’s Bible Fight makes up for its gameplay flaws with good, old-fashioned, hilarious blasphemy.

That’s right — you can play as one of six characters from the Bible (and one unlockable fighter, whose identity you can probably guess): Jesus, Moses, Mary and Baby Jesus, Eve, Noah, and Satan. Each fighter naturally comes with their own sets of special moves: Jesus uses his crown of thorns as a projectile weapon, Noah can summon all the animals of the Ark, and Eve can whip with the Devil-Snake.

It’s not anything to write home about gameplay-wise, but it’s still above average considering most 2D fighters on the Internet. Plus, how can anyone complain about a game that will invariably make you yell, “GOD DAMNIT, WHY IS SATAN’S REACH SO LONG?!?” It certainly happened to me.