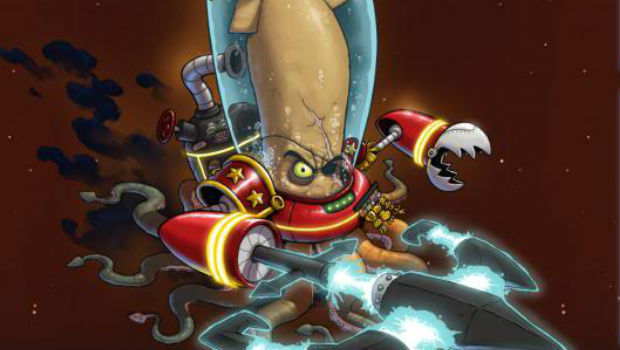 He even has a Dr. Fetus Meat Boy skin!

[Update: I’ve since played a few matches with Swiggins, and I have to say, he’s incredibly fun. Behind Leon, I think he’s currently my second favorite character, as he has a ton of potential, a good amount of variety in his skillset, and he’s invaluable in teamfights with his anchor ability.]

I gave you a taste of what was to come with Awesomenauts recently, and part of that involved the brand new ‘naut Admiral Swiggins. As of today he’s out of the testing pan and into the fire, and you can simply download your PC update and play as him for free. Currently he’s only available after you level up once, but as always, that limitation is waived if you buy a skin.

If you’re so inclined, you can pick up the Admiral Swiggins PHD (Super Meat Boy) or the Abyssal Swiggins skins. I haven’t had a chance to play as him yet, but I’ve played against him, and he seems really fun. His anchor ability is pretty brutal, as it allows him to root ‘nauts for quite a while, but he doesn’t seem to do a ton of damage, so right now he seems pretty balanced. We’ll see how the meta is in a week, but for now I’m enjoying his inclusion.