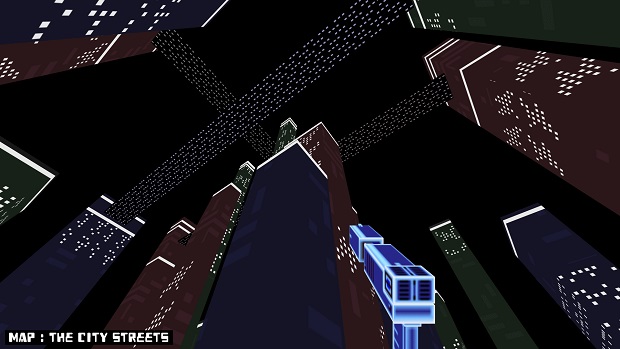 What if Berzerk were reborn as a first-person shooter using the DarkPlaces engine? What if the soundtrack were crafted by electronic music producer Wolfgun? What if you could be playing this game, right now, for free?

The answers to all these questions and more can be found on talented Australian indie developer Adam Freeman’s IndieDB page.

Described as a love letter to the classic game Berzerk with just a dash of Tron, Hazard, is a stylish-looking first-person shooter that reminds me of Early Access titles Heavy Bullets and Black Ice. If you’d like to see the game in motion, you can check out the footage that was recently featured in episode twenty-three of Fork’s Indie Bytes series.

I’m not sure if it’s the ’80s-vision-of-cyberspace aesthetic or if it’s the outstanding soundtrack that it is paired with that makes this project so appealing to me. In any case, this game is definitely worthy of a look. Besides, it’s free. What have you got to lose?

I’m definitely going to be keeping an eye on Freeman’s work in the future. If this is just a prototype/proof-of-concept, I can’t wait to see what he’ll put together as his first full-fledged game.

Also, if you get a chance, make sure to give the Wolfgun cover of Sinatra’s “Fly Me to the Moon” a listen. It’s pretty great.